Deaths are declining, but the pandemic isn't over yet, experts warn 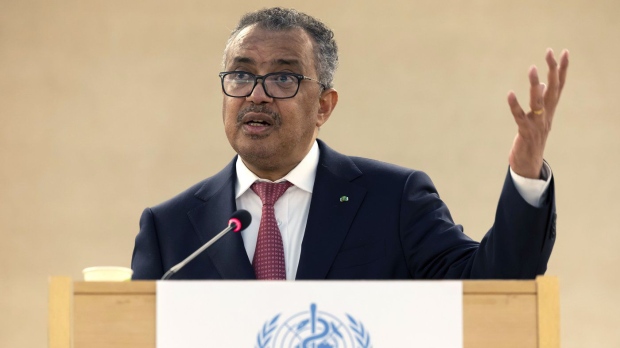 Tedros Adhanom Ghebreyesus, Director General of the World Health Organization (WHO) delivers a speech after his reelection, at the European headquarters of the United Nations in Geneva, Switzerland, on May 24, 2022. While the head of the World Health Organization says the end of the COVID-19 pandemic is "in sight," some Canadian experts warn it would be premature to declare the global health crisis over.Salvatore Di Nolfi/Keystone via AP

TORONTO - While the head of the World Health Organization says the end of the COVID-19 pandemic is “in sight,” some Canadian experts warn it would be premature to declare the global health crisis over.

Their comments come after the WHO said the number of deaths worldwide attributed to COVID-19 in the last week reached the lowest point since the pandemic's onset, and urged governments to remain vigilant to prevent backsliding at a pivotal moment.

“Psychologically, many people in the public and in government have felt like they want to move on,” said Dr. Fahad Razak, who headed up the recently disbanded group of scientists advising Ontario's government on COVID-19.

“The question is: are we there yet? And there's many parts of the system that suggest it's premature to make that call.”

Coronavirus variants have traditionally cropped up during the fall and winter, leading to a surge in cases and deaths, Razak said, and it stands to reason that could happen again this year.

If we don't see a new wave during the peak COVID season, he said experts may be more willing to declare the end of the pandemic in the spring.

“I'd like to see us get through the fall and winter with stability in our system,” he said. “And part of that means controlling the virus ... to give our health system a chance of functioning to its full extent over the fall and winter.”

WHO Director-General Tedros Adhanom Ghebreyesus announced Wednesday that deaths fell by 22 per cent in the past week, at just over 11,000 reported worldwide. There were 3.1 million new cases, a drop of 28 per cent, continuing a weeks-long decline in the disease in every part of the world.

“We are not there yet, but the end is in sight,” he said, comparing the effort to that made by a marathon runner nearing the finish line.

“Now is the worst time to stop running. Now is the time to run harder and make sure we cross the line and reap all the rewards of our hard work.”

Dr. Anna Banerji, an infectious disease specialist and associate professor at the Dalla Lana School of Public Health at the University of Toronto, also urged vigilance.

“Many individuals, including myself, think there's going to be another wave in Canada with kids going back to school and no masking, and kids can go back to school with COVID,” she said.

Banerji said the WHO should be careful not to act too quickly in declaring the pandemic has ended.

And Colin Furness, who also teaches at the University of Toronto's Dalla Lana School of Public Health, noted that Canada's lack of COVID-19 data makes it hard to prove that things are truly looking up.

“When we stopped testing for COVID, we made it a lot harder to diagnose people as having COVID. And when we made it harder to do that, we made it very hard to then start to count who died from COVID,” he said.

He said the lack of information means the WHO should temper its language.

“I think it's dangerous for the WHO to make big blanket statements, when we have a global phenomenon that just doesn't play out in the same way at the same moment in all places,” he said.

And Neil Seeman, a health communicator and lecturer at U of T's institute of health policy, management and evaluation, said that in listening to the WHO's messaging, it's just as important to pay attention to the second part of their statement - that we can't let our guards down - as it is to the first - that the end is in sight.

“What this is, is a galvanization. A call to arms,” he said. “It's by no means an indication that things are over.”