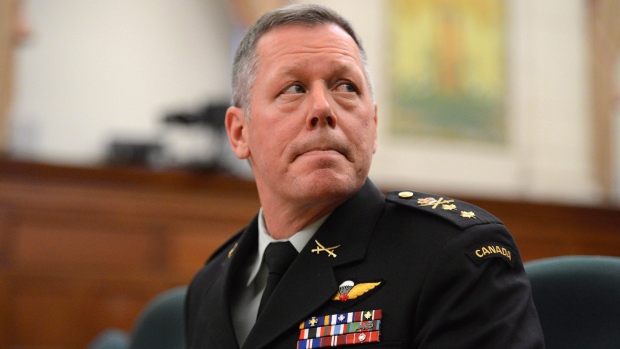 Then Maj.-Gen. Jonathan Vance appears as a witness at a House of Commons standing committee on Foreign Affairs and International Development on Parliament Hill in Ottawa on Thursday, Jan. 31, 2013. (Sean Kilpatrick / THE CANADIAN PRESS)

OTTAWA -- Canada's top military and civilian defence officials have apologized not responding sooner to questions about systemic racism in the Department of National Defence and Canadian Armed Forces.

The letter coincides with a wave of anti-racism demonstrations and sentiment in the U.S. and Canada following the killing of an unarmed Black man, George Floyd, in the U.S. by white police officers last month.

Thomas and Vance go on to reveal that military police are investigating reports of a service member spreading anti-Black pictures in Quebec.

They also acknowledge that racism is a real problem many Defence Department and military members experience on a daily basis -- and that past efforts to curb it have been unsuccessful.

Federal Black Employees' Caucus co-founder Richard Sharpe, who met with Thomas and Vance last week, described the letter as historic and expressed optimism about the military's genuine desire to eliminate racism from the ranks.

This report by The Canadian Press was first published June 21, 2020.