Defence minister to announce military will be sending plane to Uganda 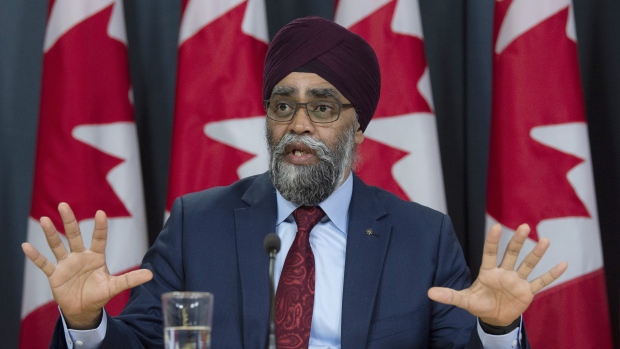 Minister of National Defence Minister Harjit Sajjan responds to a question during a news conference in Ottawa, Monday, April 8, 2019. Sajjan is to announce today that a Canadian Forces Hercules transport plane will be sent to Uganda to take part in a United Nations peacekeeping mission.THE CANADIAN PRESS/Adrian Wyld

VANCOUVER - Defence Minister Harjit Sajjan is to announce today that a Canadian Forces Hercules transport plane will be sent to Uganda to take part in a United Nations peacekeeping mission.

In late 2017, Prime Minister Justin Trudeau promised the UN that Canada would send the plane.

It was one of three promises he made when Canada hosted a major peacekeeping summit.

Only one of the promises has been fulfilled, and that was the deployment of a unit of helicopters and military personnel to help with medical evacuations in Mali.

Trudeau also promised the UN a 200-strong “quick reaction force,” but Canada has yet to register it in a UN database, which means it has not been formally offered.

The federal Liberals campaigned in the last election on a promise to renew Canada's commitment and role in peacekeeping in a major way, but have since been accused of not living up to the spirit of that pledge.