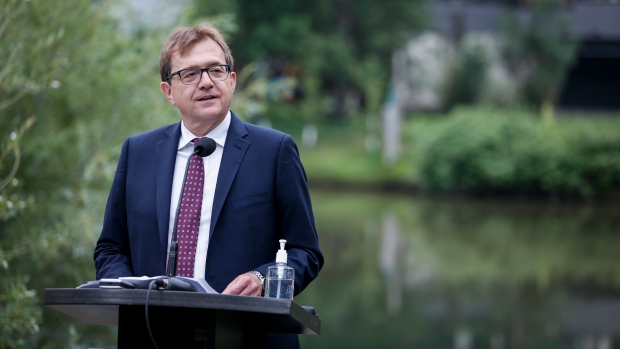 OTTAWA -- Environment Minister Jonathan Wilkinson says a detailed plan showing how Canada might finally meet a greenhouse gas emissions target will be ready in a few months but not likely in time for this fall's global climate change conference in Scotland.

Wilkinson is in Milan this week for meetings with his global counterparts to set the final agenda for negotiations that will take place at the full United Nations climate change meetings in Glasgow in early November.

The meeting, known as Conference of the Parties, or COP, is to happen annually, but the Glasgow conference was delayed a year because of COVID-19. That delay also pushed back the 2020 deadline for countries to submit more ambitious emissions-cutting targets.

"Canada, as you know, has raised its target, as have the United States and Europe, but there are many countries that have not yet and that's part of what we're going to be working to encourage greater ambition," Wilkinson said in an interview with The Canadian Press.

A United Nations report two weeks ago said where pledges currently stand, emissions will be 16 per cent higher globally by 2030, pushing global warming close to 2.7 C by 2100. The Paris agreement said it must be kept as close to 1.5 C as possible to avoid catastrophic climate change.

Canada's original goal was to cut greenhouse gas emissions by 2030 to 30 per cent less than they were in 2005. Canada submitted its new target to the UN in July, raising the cut to 40 to 45 per cent below 2005 levels by the same deadline.

Practically that means Canada has to cut between 292 million tonnes and 328.5 million tonnes of emissions a year within nine years, or 3.5 to four times what all the passenger cars in Canada collectively produce.

Last fall Wilkinson unveiled a sharpened climate policy, which experts said finally showed the path to getting to the original 2030 goal. Months later, the new target was introduced but the detailed plan to get there is still in the works.

Some of the broad strokes for the new goal came in the Liberals' platform in the recent election, most notably a promise to cap emissions from the oil and gas sector for the first time and to lower that cap every five years until it hits net-zero emissions by 2050.

Net zero means any emissions still produced are captured by nature or technology.

The Liberals also say every passenger car sold in Canada must be electric by 2035, and that same year, have a net-zero emitting electricity grid.

But Wilkinson said the "fully modelled plan" showing how the new policies will be implemented, when, and how they'll achieve the new target, is still in development and it's unlikely it will be ready before Glasgow's meetings start.

"We need to come forward with a fully modelled plan, and we intend to do that over the coming few months," he said.

Further complicating things is that Wilkinson is still not 100 per cent certain if he'll be the minister of environment in November. Prime Minister Justin Trudeau is to shuffle his cabinet in the next few weeks, and while Wilkinson said he has no reason to believe he is being shuffled, he serves at Trudeau's pleasure.

Eddy Perez, the international diplomacy manager at Climate Action Network Canada, says not having the modelling before COP isn't the end of the world but warns there is not a lot of time for Canada to delay implementing the new plans.

Canada's emissions are higher now than they were when the government signed the Paris agreement six years ago and Perez said the country is suffering from a reputation of having good plans on paper that never play out in reality.

"There is a lot that is on paper that is positive," said Perez. "I think where we need to see much more before COP26 and at COP26 is on the details, on the very practical details of the implementation of these policies."