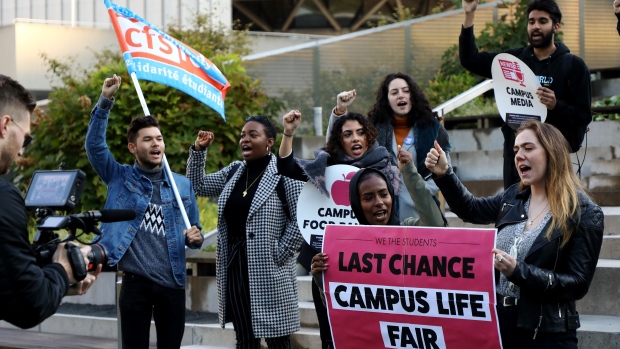 Students protest outside court before a hearing in Toronto on Friday, Oct. 11, 2019. The students are challenging the Ontario government's 'student choice initiative', which makes certain supplementary fees optional. THE CANADIAN PRESS/Colin Perkel

The Divisional Court of Ontario has quashed the Ford government’s initiative that gives post-secondary students a choice to opt out of school services that are considered as non-essential.

The three-judge panel ruled that the Student Choice Initiative (SCI) announced by the province earlier this year “are inconsistent with the statutes enacted by the legislature in respect to governance of universities and colleges.”

The lawyers representing the student groups told the judges in October that the initiative threatens the autonomy of universities. The government maintained that students should have more choice as to which service they support. It also argued that the initiative enhances transparency,

Under the initiative, ancillary fees would be categorized as essential and non-essential. Some of the non-essential services include students’ union and campus newspapers.

In the decision, it stated that the government failed to provide why some fees are essential, while others are considered non-essential.

Athletics, career services, health and counselling, and campus safety are categorized as essential.

Kayla Weiler, an Ontario representative of the Canadian Federation of Students, said in a statement Thursday that the decision confirms that SCI is unlawful and the province acted beyond their authority.

“Doug Ford’s attempt to wipe out students’ unions under the guise of giving students ‘choice’ has been exposed for what it really was: an attempt to silence his opposition,” said Weiler.

“As this matter is in the appeal period, it would be inappropriate to comment,” she wrote in an email.

-with files from the Canadian Press