Do you know what to do when you hear your smoke alarm? It depends, says fire safety educator

Many of us know that smoke and carbon monoxide alarms provide critical early alerts when these dangers are present in our home. But, surprisingly, far fewer of us realize that alarms actually make several different sounds, and each has a different meaning.

“Understanding the sounds your alarms make, and what to do if you hear them, can ensure the best protection for your home and family,” says Kidde Canada Fire Safety Educator Sharon Cooksey. “Some sounds are a serious emergency, but all—no matter the sound—require action.”

Cooksey and Kidde, the largest manufacturer of fire safety products in Canada, are raising awareness and helping Canadians learn the sounds of fire safety as part of Fire Prevention Week 2022, which runs from October 3rd through October 9th.

Most importantly, Cooksey reminds us that we must first ensure that we have working smoke and carbon monoxide alarms on every level of our home, including inside every bedroom, outside sleeping areas and in the basement.

“In an environment where occupants have as little as 2 minutes to escape, having working smoke alarms throughout the house and enough coverage throughout your home matters because every second counts in case of an emergency,” notes Cooksey.

Kidde Canada outlines that different sounds and their meaning below, plus some important tips to maximize your safety.

Learn the different alarm sounds and how to react

Cooksey says it’s best to always read the manual that comes with your alarm, as some models may differ, but in general there are four standard sounds a typical smoke alarm, carbon monoxide alarm, or combination (smoke + CO) alarm will make:

As a fire safety educator, Cooksey notes that combination smoke and carbon monoxide alarms are a popular choice that provide dual protection against your home’s top two dangers, and they can take the guess work out of alarm selection.

“Having alarms, no matter the model, is vital,” says Cooksey, “but it’s not enough to simply have them present. Please, please make sure they work.”

Data from the National Fire Protection Association (NFPA) states that, in one in five homes where smoke alarms are present, none of the units work, mainly due to dead, missing or disconnected batteries. In Canada, it’s the law to have functional alarms on every level of your home.

“Whether the beep means get out and get to safety, replace your batteries or replace your alarm, we want everyone to know that taking action should be considered an urgent life-saving measure. Don’t put it off. Don’t wait. Alarms absolutely save lives, but only if they work.”

If your alarm is chirping in the middle of the night, that could also be an indication that you need to replace the battery. As a battery nears the end of its life, the power it produces creates an internal resistance. A drop in temperature, especially at night when most homes are coolest, can further increase that internal resistance and send the alarm into chirp mode. When that happens, it may impact the battery’s ability to deliver the necessary power to warn residents in the case of an actual emergency, so be sure to replace the battery as soon as possible. Make sure NOT to disconnect the alarm or the battery. To help prevent night-time chirps, it’s best to replace batteries twice a year or opt for an alarm with a 10-year, built-in battery. 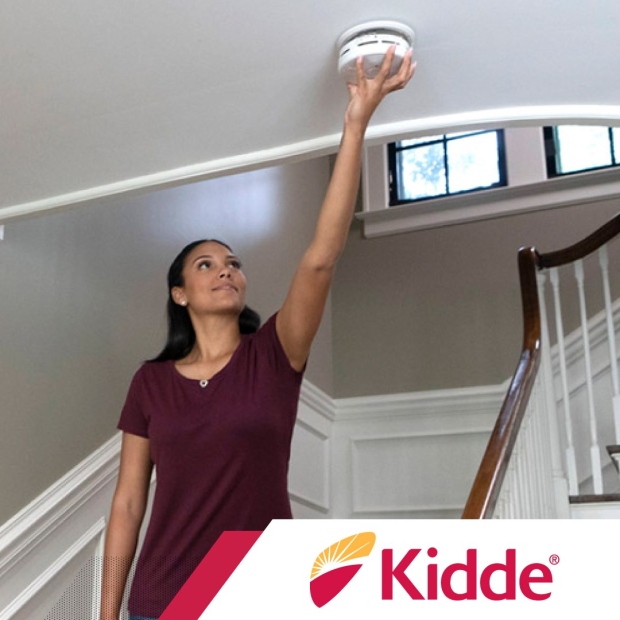 Test smoke alarms, and replace them every 10 years.

“Missing batteries are a big problem,” says Cooksey, “but many people also don’t realize that alarms also need to be replaced, according to manufacturer’s guidelines, every 10 years.”

If you aren’t sure how old your alarm is or when it was installed, a simple workaround is to use the manufacturing date located on the back of the alarm. When in doubt, she says, replace the unit altogether. When you do, consider purchasing a combination smoke and carbon monoxide alarm.

“Not only do you get double protection with a combo alarm, but you also eliminate the need to maintain separate units and minimize upkeep,” says Cooksey. “Carbon

monoxide is as dangerous a risk as fire. In fact, in Canada, 88 per cent of homes have a risk of carbon monoxide exposure.”

Cooksey suggests looking for a worry-free unit, with a 10-year, sealed in lithium battery to save the hassle of battery changes.

Cooksey reminds us to check our smoke and carbon monoxide alarms at least once a week. She recommends making it a part of your weekly routine. She also urges every household to draw up and practice an escape plan with family members at least twice a year. It’s a good time to teach every member of the home to recognize the different alarm sounds and what to do in an emergency. And, she says, don’t forget your family pets in your fire safety plan.

What else might you consider when it comes to home safety? Cooksey recommends having a working fire extinguisher on each floor. These can be used to create a safe exit path in the event you need to escape a bigger fire. Place them close to an exit and learn how to use them before a fire emergency ever occurs.

In the kitchen, put a fire extinguisher behind where you cook, so it can be used on stovetop fires.

If your home has a second or third storey, fire escape ladders are also useful, offering an additional means of escape if fire has blocked your primary escape route.

For more fire safety tips and information on fire safety planning and products for your home, visit www.kiddecanada.com.