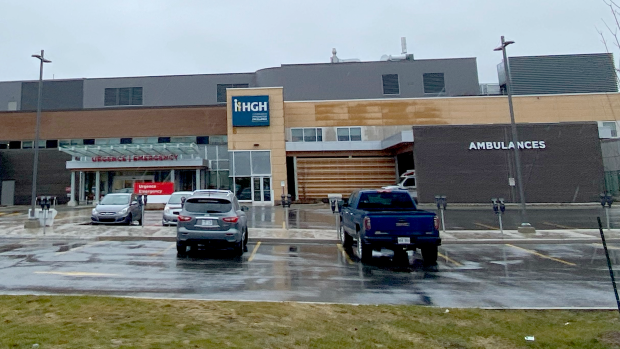 A doctor in eastern Ontario was charged with one count of first-degree murder Friday in connection with multiple suspicious deaths at the hospital where he worked.

Dr. Brian Nadler, 35, a specialist in internal medicine who worked at the Hawkesbury and District General Hospital, remains in custody after appearing in court on Friday, provincial police said.

Police have not said how many deaths they're investigating at the hospital located between Ottawa and Montreal, nor have they provided any information about his alleged victim.

Nadler's lawyer, Alan Brass, declined to discuss the allegations against his client.

“The only comment I'm prepared to make is that Dr. Nadler maintains his innocence, and the charges against him will be rigorously defended,” Brass said.

Meanwhile, a spokeswoman for the hospital said it has stripped Nadler of his ability to practice medicine there.

“Dr. Brian Nadler, an HGH physician, has been charged with first-degree murder and remains in custody,” a hospital press release reads. “All of his HGH privileges have been revoked.”

The hospital said it's co-operating with the Ontario Provincial Police probe.

“In collaboration with the OPP, we are reaching out to the concerned families,” the statement reads.

“We are equally concerned with our employees and physicians that may be affected by this difficult situation. We are providing them with employee assistance and post-traumatic counselling.”

Provincial police have said they took one person into custody after being called to the hospital on Thursday.

Police said there's no current risk to the public or patient safety, and routine hospital operations won't be affected by the probe.

The College of Physicians and Surgeons of Ontario registry shows Nadler is a specialist in internal medicine, who graduated from McGill University in 2010.

He previously practised in Saskatchewan, where the College of Physicians and Surgeons said he was charged with unprofessional conduct for allegedly using a profane term when referring to a female colleague following an argument in 2014.

He was also accused of altering a patient's medical file without noting the date or time of the change.

The College of Physicians and Surgeons of Saskatchewan said the situation was resolved after Nadler agreed to take courses in professional ethics and medical record-keeping.

He went on to practise medicine in Nevada starting in 2018, according to the Nevada State Board of Medical Examiners.

The board said he completed a yearlong fellowship in geriatrics at the University of Nevada, Reno, in September 2019.

It said he had previously trained as a neurological surgery intern in Alberta, where he also did his residency in internal medicine.

His certificate to practise medicine in Ontario was granted in February 2020, according to the College of Physicians and Surgeons of Ontario.

A spokesman for the Ministry of the Attorney General says Nadler, who lives in Dollard-Des-Ormeaux, Que., is due back in court on April 6.

This report by The Canadian Press was first published March 26, 2021.