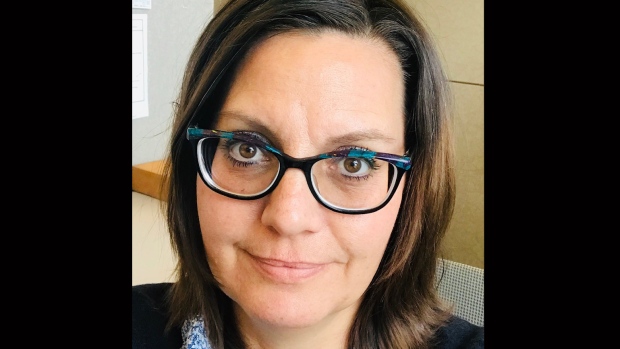 Karen Murias is shown in this undated handout photo. Murias waited 18 months for surgery to have a cyst removed from her liver but her surgeon called the day before her operation to say it had been cancelled due to beds being saved for COVID-19 patients. Now she's trying to get into a pain clinic to manage her daily pain and is back on a wait list, now knowing when she'll have her surgery. THE CANADIAN PRESS/HO - Karen Murias

Karen Murias waited 18 months for surgery and finally got a date for a procedure she hoped would bring relief of "excruciating pain" in her shoulder and abdomen.

But half an hour after getting a call on a Sunday in mid-March that a liver cyst would be removed the next day, her surgeon phoned to say the operation had been postponed because beds were being saved for a possible influx of COVID-19 patients.

"I waited till I got off the phone but I bawled my eyes out," she said from her home in Surrey, B.C.

Murias, 49, had been anticipating that surgery since September 2018 when she saw her family doctor about the condition. First, it took six months for an appointment with a specialist, then her surgery was scheduled over a year later.

"It's been a long wait," she said, her voice cracking.

She has had regular ultrasounds since, the latest revealing at least 20 cysts on her liver. The largest one would have been removed on March 16.

Murias has no idea when she will have surgery but is now waiting to hear about an appointment at a local pain clinic in hopes she can get help managing the agony from even sitting for a few minutes or doing household chores like vacuuming.

"There are just so many unknowns right now. That's why I'm hoping the pain clinic will come through," Murias said, adding she has empathy for the many cancer patients whose surgeries have been prioritized while elective surgeries were cancelled.

Thousands of scheduled surgeries have been delayed across the country since March and various provinces have announced plans to expedite procedures to deal with major backlogs.

But health critics say the system was broken long before the pandemic, with people like Murias waiting for years to get their turn in operating room.

Dr. David Urbach, chief of surgery at Women's College Hospital in Toronto, said the pandemic offers a once-in-a-generation opportunity to overhaul the system and transform how surgeries are done nationwide in the aftermath of COVID-19.

He said the current model is inefficient because patients endure two types of waits -- first to get an appointment with a surgeon, then to get surgery that is booked based on a particular physician's available block of operating-room time.

Urbach is proposing a so-called single-entry model that would reduce wait times by allowing patients needing a certain type of surgery to be placed on a central list, with the most urgent procedures given priority. As a second part of the approach, the operation would be done by the first available surgeon among a team of physicians.

The list would be for procedures done either at one hospital where several surgeons may be doing the same kinds of operations, or among a core of hospitals, he said, noting patients needing a transplant, for example, are placed on a provincial list and that approach could eventually be used for other surgeries.

The result would be a more "ethical" system based on shared operating-room time, said Urbach, who co-authored a commentary on the proposal in a recent edition of the Canadian Medical Association Journal.

"This was the biggest threat to Canadian medicare three months ago -- wait times. At the time we knew the solution, which was to do these types of models. They don't make the problem go away but what they do is they make wait times as short as possible for everybody," he said of the call to action by him and Dr. Danielle Martin, executive vice-president and chief medical executive at Women's College Hospital, where she is also a practising family physician.

Many provinces, including British Columbia, Alberta, Ontario and Nova Scotia, already have some type of single-entry model for hip and knee surgeries, for example, but Urbach said it's time to scale up such queues for other types of operations.

Doctors who perform transplants, deliver babies and do cardiac surgery use a single-entry model and plenty of similar schemes exist in hospitals in the United States and Europe.

"It's very streamlined, it's sensible and simple and if you were to create a system from scratch that's probably almost without a doubt what you'd do," said Urbach, who is also a professor of surgery at the University of Toronto.

The British Columbia government has announced it will take up to two years to clear a backlog of 30,000 patients' surgeries that were cancelled or not booked, but with pre-existing wait lists that number is pushed to 93,000 procedures. The province expects to resume elective surgeries next week, with operating rooms running at full capacity by mid-June and evening and weekend procedures added over the next four months.

In Ontario, nearly 53,000 surgeries were cancelled or unscheduled, but Health Minister Christine Elliott said last week there's no timeline for when procedures are expected to resume.

Alex Maheux, a spokeswoman for CIHI, said it will take several months before the agency can determine how many surgeries were delayed across the country due to the pandemic.

Urbach said barriers to adopting the single-entry model may include some surgeons' reluctance to give up control of their larger blocks of operating-room time, which allows them to do more procedures and earn more money, but the expected future waves of the pandemic will require an approach that is focused on patients.

Dr. Jason Sutherland, professor at the University of British Columbia's Centre for Health Services and Policy Research in the faculty of medicine, said the proposed single-entry model could be a longer-term solution to cut long wait times for patients who may become depressed as their pain lingers and they're unable to work or look after their children.

"One of the government's roles, in addition to maximizing the health of the population and cost efficiency, is equity and I think the single-entry model is a more equitable model because it equalizes the wait for everyone and then the surgeons don't have these different lengths of wait lists," said Sutherland, who studies outcomes of elective surgeries.

However, a single-entry model would have to be optimized to expedite all types of surgeries rather than just high-volume procedures such as hip and knee operations so some patients are not disadvantaged, he said.

Access to care was the main issue at a B.C. Supreme Court trial launched by orthopedic surgeon Dr. Brian Day, who argued patients have a constitutional right to faster services at private clinics like the one he runs in Vancouver.

The case, which has been before a judge since February but is expected to land at the Supreme Court of Canada, may have been weakened considerably had single-entry models been adopted widely, Urbach said.