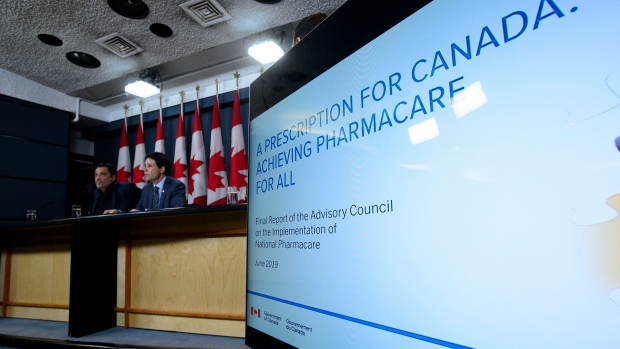 OTTAWA -- Doctors and nurses on the front lines of Canada's health system are sounding the alarm after the Liberal government appears to have put its promise of a national pharmacare program on the back burner.

When the Trudeau government delivered its first federal budget in two years last month, it included more than $100 billion in new spending over the three years.

But while there was one brief mention of pharmacare in the 739-page document, it only re-stated a commitment from the 2019 budget of $500 million for a national program for high-cost drugs for rare diseases.

Dr. Melanie Bechard, a pediatric emergency room physician and chair of Doctors for Medicare, says she was disappointed at the lack of new funding for pharmacare in the budget. She believes it's an indication the government is not making it a priority.

“I was very disappointed because the government has promised national pharmacare. They've conducted a study that really outlined the path to get there,” she said.

Even the Budget 2021 document itself acknowledges that “the case for universal pharmacare is well-established,” Bechard noted.

“The budget acknowledges that it makes sense. It's good public policy. But unfortunately, we're just getting words instead of any funding towards it, so that's completely ineffectual.”

The Liberals campaigned on a promise to “take the critical next steps to implement national universal pharmacare” in their 2019 election platform, and similar commitments have since appeared in throne speeches and mandate letters to the federal health minister.

In 2019, an expert panel appointed by the Liberals recommended a universal, single-payer public pharmacare system should be created in Canada to replace the current patchwork of prescription drug plans. This panel, which was led by former Ontario health minister Eric Hoskins, reported that such a plan would result in savings of an estimated $5 billion annually.

Canadians spent $34 billion on prescription medicines in 2018, the panel report said, adding drugs are the second-biggest expenditure in health care after hospitals.

“I have seen instances where kids have come into the emergency department having asthma attacks, and the parents show me inhalers and they're nearly empty. And when I say, 'We need to refill this so that we can avoid situations like this,' the parents say, 'Well, these are expensive to refill, Dr. Melanie, we can't always afford to get a new one every couple of months.'

“And it's sad because arguably the child did not need to come into the emergency department if they had sufficient medication at home.”

While she also expressed disappointment at not seeing new spending for pharmacare in the budget, Sharon Batt, adjunct professor of bioethics and political science at Dalhousie University and a health policy expert, said she was not surprised.

“It does seem like it's taken a back burner,” she said.

“Certainly there's a huge resistance to this plan... on the part of the pharmaceutical industry, some of the patient groups and some researchers, and I think that is definitely playing out within the government's priorities and making it harder for them to move forward with pharmacare.”

Some provinces and territories have also been lukewarm toward the idea of pharmacare, pushing instead for increases to federal health transfers.

Batt attributes this resistance to the reason Ottawa is instead focusing its efforts on creating a program to fund medications for rare diseases, which has more political buy-in.

“I think they're just kind of kicking the can down the road and hoping that the industry will back off or that there will be more public pressure against the industry,” Batt said of the federal government.

“I think they don't know what to do. I think they probably would like to bring a plan in, but they want to have the public support. And that would include patient support.”

Earlier this year, the NDP tabled a private member's bill to establish the legal framework for a national pharmacare plan, but it was defeated at second reading by a vote of 295-32. Only two Liberal MPs supported the bill.

NDP health critic Don Davies said he worries Canadians are increasingly becoming cynical about politicians who promise things, such as pharmacare, during elections and then don't follow through.

Health Minister Patty Hajdu was not available for an interview, but her spokesman, Cole Davidson, pointed to the paragraph in Budget 2021 that commits to work with provinces and stakeholders to “build on the foundational elements that are already in progress, like the national strategy on high-cost drugs for rare diseases, toward the goal of a universal national program.”

He also noted Ottawa has established a “transition office to create a new Canada Drug Agency and a national formulary” and officials are currently working with provinces and experts to create a drug plan for Canadians with rare diseases, with a target launch date of 2022-23.

“No Canadian should have to choose between paying for prescriptions and putting food on the table,” Davidson said in a statement.

“We're committed to working collaboratively with willing jurisdictions to develop a national, universal pharmacare program, and that important work continues.”

Linda Silas, who presides over the Canadian Federation of Nurses Unions, said nurses across Canada were sure that pharmacare was a “done deal” after the last election.

The budget's lack of focus on making it a reality is concerning, she said.

“You'd think, because we're in the middle of a health crisis, they would have put a big focus on a health crisis that already exists. One in four families do not have prescription drug coverage, that's a crisis for those families.”

However, Silas said she wasn't entirely surprised not to see new money in the budget for pharmacare. In the lead-up to its release, she said her organization was consulted numerous times by Liberal cabinet ministers and officials asking for input on what should be in the budget.

When she told them pharmacare was at the top of the list, she said there was a notable change in tone.

“The messages we were hearing was, 'Well, Linda, is there something else (other) than pharmacare?...You know, Linda, our priorities are pharmacare. But if pharmacare is not there, what else should be in there?' ” she said, recalling the conversations.

Speaking ahead of her shift at the children's hospital in Ottawa, Bechard said she doesn't understand how pharmacare has seemingly fallen off the radar when she believes the case for bringing in a national medicare plan is “even more dire” due to COVID-19.

“The pandemic has brought with it massive amounts of job losses and unemployment, and in our current system people rely on employment to get coverage for medications,” she said.

“Arguably now, more than ever, we need to have national, universal pharmacare to make sure that people can actually access the meds they need to stay healthy.”