Councillor Doug Ford says drug allegations published about him in The Globe and Mail are untrue.

The allegations were published Saturday morning.

The paper says ten people who grew up with Doug Ford have described how for several years in the 1980s he was a dealer of hash.

The paper says they talked to several people who did not wish to be identified and said they purchased hash directly from Doug Ford, or said they supplied him or witnessed him handling the drug.

While he admitted to CP24 that he has smoked marijuana in the past, Ford said he does not condone drugs.

“I never did this drive-through drug dealing that they’re saying,” Ford said.

The Globe found nothing on the public record that shows Doug Ford was ever criminally charged for illegal drug possession or trafficking.

“It’s not true. It’s uncorroborated. They go out there and write these stories. They want to try and ruin our family,” Ford said.

The Globe and Mail says it has been investigating this story for the past 18 months.

"I want these ... unnamed people, come forward. If it's so true, what are you hiding?” Ford said. “For the last two years I’ve been getting calls from people across the country whose names I couldn’t remember in high school. They’re saying outlandish things, untruthful things.

He placed the report in a long line of other negative media reports about his family.

“There has to be a point where enough is enough,” Ford said.

In a steady voice Ford said his family had been hurt by the allegations and said he feels his family’s character has been under attack by the media.

“This is unprecedented in Canadian history in politics,” Ford said. “There is no family that has been attacked so viciously by the mainstream, left-wing media.”

Ford said the people of Toronto should ultimately be the ones to decide whether he’s doing a satisfactory job.

“Why don’t we go to the people,” Ford said. “If the council wants, why don’t we call an overall election? Let’s put this to bed. Let the people be the judge and jury.”

The report about Ford comes a day after his brother, Mayor Rob Ford, spoke to the media to deny drug allegations made against him in The Toronto Star.

Ford’s statement followed a May 16 report in which two Toronto Star reporters alleged that they had viewed cellphone video that appeared to show the mayor smoking from a glass pipe.

The Star said it had been approached by drug dealers who wanted to sell the video for a six-figure sum, but the newspaper declined and the alleged video has not yet surfaced.

In a letter accompanying the Globe’s story Saturday, Editor-in-Chief John Stackhouse said the mayor’s statement spurred to paper to publish its report.

“After Rob Ford spoke to the media on Friday afternoon, carefully saying he does not use crack cocaine and is not addicted to crack cocaine, a group of senior editors… concluded again that it is in the public interest to publish,” Stackhouse said. “Indeed, we felt it would be irresponsible not to share this information with the public at this time.”

He also said “Canadians need to understand the background of the most politically powerful family in the country’s biggest city.”

Stackhouse said the sources the paper spoke with for the story asked to remain anonymous because they feared the Ford Family’s power in Toronto.

He said the story was executed “with utmost caution, journalistic rigour and legal scrutiny.”

In an interview with CP24 Saturday afternoon, Stackhouse reiterated that point and called the reporting “rock solid.”

Stackhouse said the Globe approached Rob and Doug Ford several times to speak about the allegations, but they declined. 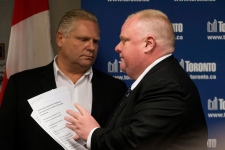 Toronto Mayor Rob Ford, right, walks past his brother Doug after reading a statement to the media in Toronto on Friday, May 24, 2013. (The Canadian Press/Chris Young)