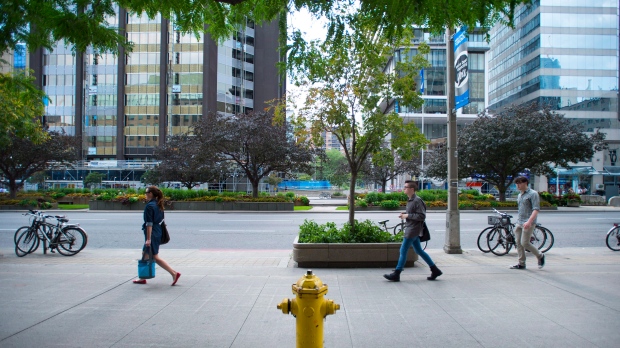 University Avenue is shown in this file photo. THE CANADIAN PRESS/Darren Calabrese

Two downtown city councillors are pushing for a bike lane on University Avenue as part of the city’s response to COVID-19 but Mayor John Tory is accusing them of “playing politics” with the crisis.

The Toronto Star says that councillors Joe Cressy and Mike Layton have written a letter to the city’s general manager of transportation services asking that the bike lane be included in the ActiveTO plan, which aims to provide more space for pedestrians and cyclists to move around the city during the pandemic.

The newspaper says that the councillors want to see a protected bike lane installed along the busy thoroughfare from Davenport Avenue to Adelaide Street.

Tory, however, told CP24 on Friday morning that he has some reservations about rushing ahead with the long-discussed project.

He said that staff are “deliberating right now” on how we will be able to provide more public spaces to residents going forward and that will include an effort to “accelerate” some of the projects included in the city’s 10-year cycling network plan.

That plan, it should be noted, already calls for a study of a bicycle lane on University Avenue between Bloor and Front streets in the “near-term.”

“You have to be careful about this, you have to do it strategically and not based on politics, which I think is what they are playing a little bit,” Tory said on Friday. “You can’t react emotionally to it.”

In the letter sent to Transportation Services General Manager Barbara Gray, Cressy reportedly pointed out that University Avenue is directly adjacent to a key hospital corridor “where we have thousands of front-line workers, many of whom will need to be able to get to and from work safely, while physically distancing.”

He said that the lane would also connect with some of the city’s busiest cycling thoroughfares, including College, Richmond, Adelaide and Bloor streets.

Speaking with CP24 on Friday morning, Cycle Toronto Campaigns Manager Kevin Rupasinghe said that a University Avenue bike lane would be an important project, especially given the fact that people may take the subway in lower numbers going forward.

“It’s a wide and fast street, and it is very uncomfortable to ride a bike right now but we have seen on other streets like Bloor how a bike lane actually made it safer for all road users,” he said. “That is the remarkable thing. You put a bike lane in and it gives everybody a cue that maybe we shouldn’t be driving so fast, it gives people on bikes a little more space to get around comfortably and it actually puts a bit of space between some of the people on the sidewalk and some of the fast moving traffic.”

Rupasinghe said that it is important that the city improves infrastructure for cyclists so that people who may abandon crowded public transit vehicles don’t end up in personal vehicles, something that he said would have a “much, much worse impact on congestion” than losing a lane of traffic along University Avenue.

Tory, meanwhile, said that staff do plan to come forward with a report that will make recommendations about things like expanded bike lanes in the wake of the global pandemic but he said that process must be allowed to play out.

“I think what has happened now is there has been a debate between those who think we should have more of this kind of space and those who say we shouldn’t. I think we will have more because that is where were headed anyway,” he said. “We have a 10-year plan. What we are essentially talking about doing is accelerating some of it to get into place faster because of the very unique circumstances we are in. It is a sensible and strategic way to go about it.”