Downtown population will nearly double by 2041 amid building and baby boom: Keesmaat 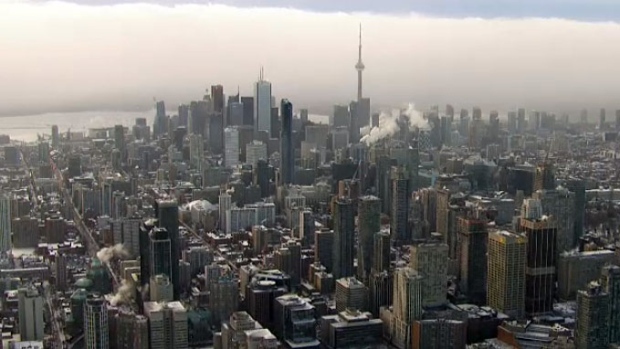 The Toronto skyline from the CTV News chopper on the morning of Jan. 26, 2015.

The population of downtown Toronto will almost double over the next 25 years as a building boom and baby boom bring more and more people to the area, Chief Planner Jennifer Keesmaat says.

The current population of the city’s core is believed to be about 250,000, however new data from the City of Toronto estimates that about 475,000 people will call the area home by 2041.

The anticipated increase is linked to continued development in the downtown as well as higher birth rates.

“We have been building out a planning framework that has been in place for about 40 years – it has been very successful – and now we are at a point where we need the next layer of thinking,” Keesmaat told CP24 on Tuesday. “We have been so successful in attracting growth to the downtown that we need the layer that now looks at long-term infrastructure and will really be the finishing off of the downtown if you will.”

Though strollers have long been a common sight in several Toronto neighbourhoods, that hasn’t always been case in the downtown core, where high-rise condominiums and office towers outnumber single-family dwellings.

That is beginning to change, though, with several condo-heavy neighbourhoods seeing spikes in the number of babies and toddlers living within their boundaries.

Between 2008 and 2011 the “Waterfront Communities” neighbourhood, which includes the Entertainment District, the Distillery District and City Place, saw the number of children ages 0-4 increase by 60.25 per cent while the Bay Street Corridor saw the number of children ages 0-4 go up by 32.5 per cent. Babies and toddlers were also up 33 per cent in the city’s Niagara neighbourhood, which includes Liberty Village.

It should be noted that the increase in babies and toddlers did not outpace the overall population growth in the Waterfront Communities and Niagara neighbourhoods, though it did in the Bay Street Corridor.

“There is a baby boom and you know what comes after babies, you have toddlers and then you have kids that need to go to school and then you have teenagers,” Keesmaat said. “Thinking about all the steps in the process and the infrastructure that is required for families is going to be really big piece of work.”

As Keesmaat and other civic leaders work on ensuring that there is adequate infrastructure to keep up with the expected growth in the downtown core, the city is launching a website to solicit input from members of the public.

A number of public consultations are also planned for the coming months.

“We want bold ideas from elsewhere,” Keesmaat said. “You know, Melbourne has its laneways, Copenhagen has its cycling infrastructure, Chicago has Millennium Park. What is the big hook we are going to hang the future of downtown Toronto on?”