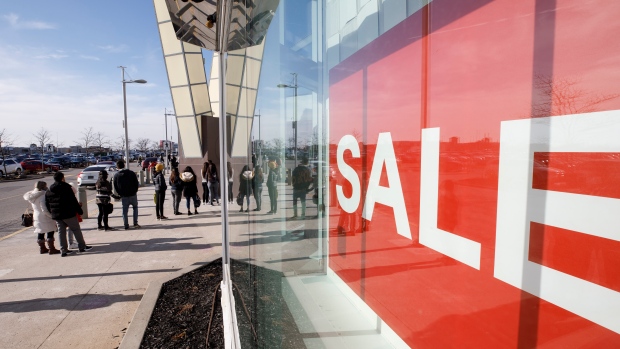 Shoppers line up outside Vaughan Mills Shopping Centre in Vaughan, Ontario, Sunday, Nov. 29, 2020. As malls in the Toronto core have shut due to provincial orders, shoppers flocked to malls on the outskirts of the Greater Toronto Area for Black Friday weekend shopping. THE CANADIAN PRESS/ Cole Burston

At least 32 charges were laid over the weekend in York Region following a COVID-19 regulation enforcement blitz.

York Region’s Medical Officer of Health Dr. Karim Kurji confirmed the charges in a statement released Monday afternoon, saying the area has seen a “jump in the number” of COVID-19 cases and officials “don’t exactly know what is responsible.”

“We are investigating,” he said. “York regional council had made the commitment of enforcement of the guidelines on York Region residents as well as businesses. As a result, we have the COVID-19 enforcement task force that has been very busy over the weekend.”

Officials conducted 867 inspections of businesses over the weekend as residents in the Greater Toronto Area rushed to get some holiday shopping done in regions that were not under a lockdown order.

As a result of those inspections, there were 32 charges laid as well as 1,151 “compliance education activities.”

The ministry of labour said on Friday that the province would be launching an enforcement blitz in York Region to ensure businesses are following the proper protocols set in place to help curb the spread of COVID-19.

On the Friday, York Region said that six businesses were charged under the Reopening Ontario Act and Section 22 of the Health Protection and Promotion Act, including a Costco in Markham, Vaughan Mills Shopping Centre, and a T&T grocery store.

No further details were provided regarding the charges laid over the weekend or any fines issued as a result of the investigations.

“See whether you can actually get your shopping done online from the local stores. If you can’t, and you have to visit one of the stores, please visit them at off-peak hours and try to minimize the time you would spend in the malls or in the stores and observe the directional arrows in the stores as well as the physical distancing requirements.”

Toronto and Peel Region have been placed under a 28-day lockdown last week, which means non-essential businesses have been shuttered. Curbside pickup as well as delivery are still in operation, but some residents have taken to travelling to York Region in an effort to take advantage of Black Friday sales.

57 charges laid in Mississauga in a week

Meanwhile, in Mississauga, officials have conducted more than 4,500 inspections over the last week since Peel Region went into lockdown.

As a result of those inspections, 57 charges were laid and 51 “notices of contravention” were handed out.

Officials added that public complaints have also tripled in the past week.

“The vast majority of people and businesses are complying but there are some out there who are intentionally breaking the rules and putting lives at risk.”

The charges come as officials confirmed more than $47,000 in fines that were issued following house party in Mississauga.

Police said that 27 fines of $880 apiece were issued and the two hosts of the party were each given a Part 3 Summons that carries a minimum fine of $10,000.