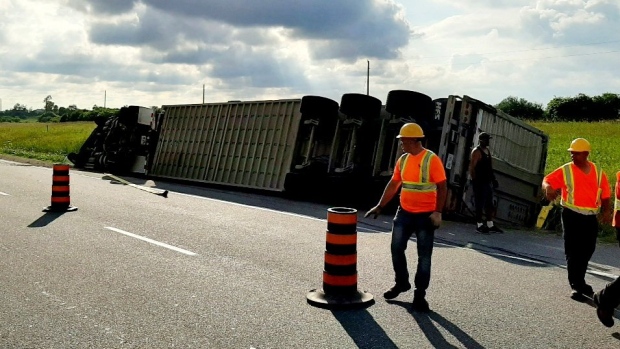 A rolled over tractor trailer that was carrying livestock is pictured at Highway 7 at Nazfiger Road in Wilmot, Ont. Monday July 27, 2020. (Handout/ OPP)

Approximately 45 pigs are dead after a tractor trailer carrying livestock rolled over on a highway west of Kitchener, Ont.

Ontario Provincial Police said the vehicle was turning east onto Highway 7 at Nazfiger Road in Wilmot, Ont. when it rolled over Monday morning.

Roughly half of the 90 pigs onboard died in the rollover, police said.

The 41-year-old driver was taken to hospital as a precaution and did not sustain any serious injuries.

OPP said he has now been charged with careless driving and failing to properly wear a seatbelt.

The Canadian Food Inspection Agency and veterinary services responded to the scene to care for the remaining pigs.

About 1/2 of the 90 pigs died as a result of this rollover. @InspectionCan and veterinarian services on scene overseeing the care of the livestock.
41 year old man from Seaforth, On.
charged with: Careless driving and fail to properly wear seatbelt. All lanes reopened