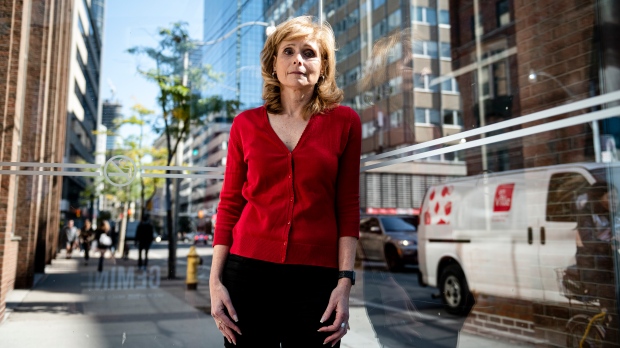 Lisa Fruitman is shown outside the College of Physicians and Surgeons of Ontario after a hearing involving Dr. Brian Thicke in Toronto, on Tuesday, Oct. 8, 2019. THE CANADIAN PRESS/Christopher Katsarov

TORONTO - Two women who accused Dr. Brian Thicke of sexual abuse confronted the physician Tuesday after he was formally reprimanded for engaging in professional misconduct towards more than a dozen women over several decades.

Miryana Golubovich and another complainant, who cannot be identified due to a publication ban, shouted “sexual predator” and “(expletive) pervert” at Thicke from the audience at the end of a disciplinary hearing in which he pleaded no contest to two breaches of the Medical Act.

Another complainant, Lisa Fruitman, stood near them and watched as the 90-year-old doctor - and father of the late TV star Alan Thicke - appeared to laugh at the encounter.

Thicke, who initially faced allegations of sexual abuse and sexual impropriety, instead agreed not to challenge allegations that he engaged in an act or omission relevant to the practice of medicine that would be considered disgraceful, dishonourable or unprofessional. He also pleaded no contest to another, historical version of the same charge.

“You were in a position of power in respect of your patients and you grossly violated the trust that they had in you,” the panel said in a reprimand that was read aloud at Tuesday's hearing.

“Your misconduct has caused profound and long-lasting harm to your patients, who have lost their trust in the profession and in male physicians. Patients were very confused by your actions, and felt ridiculed, shamed, embarrassed, shocked and deeply upset.”

The College of Physicians and Surgeons of Ontario did not seek to strip Thicke of his medical licence, noting it expired last year and he has agreed not to reapply to practise medicine in any jurisdiction.

But that resolution did not satisfy the complainants who attended Tuesday's hearing, with some saying it does not reflect the gravity of Thicke's actions and the lasting harm he inflicted on them.

The college “really dropped the ball on a decades-old serial sexual predator who hid behind the medical profession to abuse women and then laughed about it in the end - the guy was laughing in there as we confronted him with the actual serious allegations,” Golubovich, 39, said outside the hearing.

Fruitman, 53, who filed the first complaint against Thicke in 2015, said she felt betrayed by the regulatory system that allowed the case to drag on for so long.

“They let him off with just a plea - it felt like a slap on the wrist,” she said outside. “The system is broken.”

Both women said they were ready to testify if the case had proceeded. The college said it would not comment on the process of the case.

An uncontested statement of facts presented at the hearing laid out incidents involving 14 patients and one of Thicke's colleagues, some of them dating back to the 1970s.

Thicke was a designated civil aviation medical examiner and many of the patients were undergoing medical exams to obtain pilot's licences or jobs as flight attendants, the committee heard. They were referred to him by their employers and others in the aviation community.

A few others were teenagers who attended Thicke's family practice, the committee heard.

The statement said Thicke conducted breast exams on several patients without obtaining informed consent or explaining why the exams were necessary, and at times without giving them privacy to change clothes or a gown to cover themselves.

At times he also made inappropriate comments, the statement said: referring to his patients' breasts as “boobs” or “boobies,” commenting on their appearances and at one point telling a teen who requested a prescription for birth control it was not a licence for promiscuity.

In another instance, he called a 15-year-old patient a “fat ass” after she expressed concern about a lump on her buttocks and told her the problem would likely go away if she lost weight.

The statement also said that while working in a hospital in 1977, Thicke approached a coworker who was bottle-feeding a baby, slid his hand into her uniform and squeezed her breast.

Lawyer Elisabeth Widner, who represents the college, described it as “one of the most egregious forms of sexual harassment in the workplace.”

Golubovich, who went to Thicke 14 years ago so she could work as a flight attendant, said outside the hearing that Thicke touched her bare breast while listening to her heartbeat through a stethoscope.

She had undone the two top buttons of her blouse, she said, but he unbuttoned more, slid his hand under her shirt and bra and rested his hand on her nipple for roughly 10 seconds, she said.

She felt she couldn't fight him off because he “held my economic future in his hands and because I really wanted the job,” she said.

Fruitman did ask Thicke why a breast exam was required and he responded by asking whether she was questioning his judgment, the statement said.

She said outside the hearing that she returned to see him two years later when she renewed her licence and had a similar experience. Eventually, she gave up her licence rather than endure another medical exam, she said.

“You just kind of felt that there was nobody you could turn to and say that that happened to you because everybody was sort of required to go there,” Fruitman said.

Thicke's office was full of photos of his famous son at a time when Alan Thicke's hit show, “Growing Pains,” was at the height of its popularity, she said. “He made that very clear that he was very much in the public eye,” she said.

Fruitman's daughter encouraged her to file a complaint with the college in 2015, she said, but the regulatory body chose not to refer that complaint to its discipline committee.

She appealed to the Health Professions Appeal and Review Board, which ordered the college to reconsider. Allegations from other complainants, all but three of whom cannot be identified due to a publication ban, were added to the case later.

Fruitman said she worries her experience will discourage others from coming forward with similar allegations in the future.

“I felt the college actually was intimidating ... I was made to feel that they didn't believe me all the way through,” she said. “I had to keep fighting a system (that) really didn't show support, didn't make me feel that they had really heard me.”

Restrictions were placed on Thicke's practice in early 2018 and he allowed his medical registration to lapse several months later.