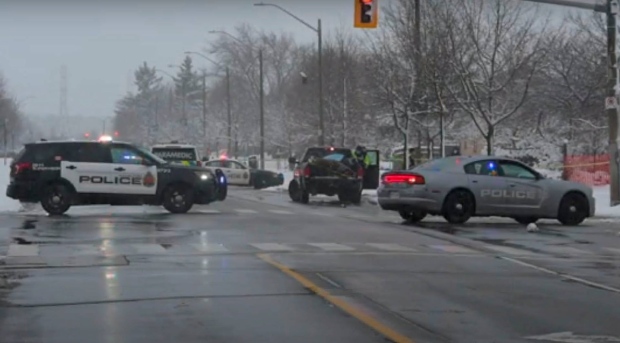 Emergency crews attend the scene of a collision in Hamilton, Ont. on Dec. 1, 2020. (Andrew Collins)

A 28-year-old man has been charged after he allegedly struck and critically injured an 11-year-old boy who was crossing the street at a marked crosswalk in Hamilton on Tuesday afternoon.

The collision occurred on Upper Gage Avenue at Royal Vista Drive at around 3:20 p.m.

Police say an 11-year-old boy was crossing the street at a marked crosswalk with the assistance of a crossing guard when the driver of a southbound Dodge RAM pickup truck ran through a red light and struck the child.

The boy was rushed to hospital with life-threatening injuries and police have not yet provided an update on his condition.

The driver of the vehicle was arrested and has been charged with dangerous driving causing bodily harm.

"Police have ruled out driver impairment and all other contributing factors are being investigated at this time," Hamilton police said in a news release issued Wednesday.

The driver is expected to appear at the John Sopkina Courthouse later today.

Investigators are asking anyone with information about the collision to contact the Hamilton Police Service's collision reconstruction unit.