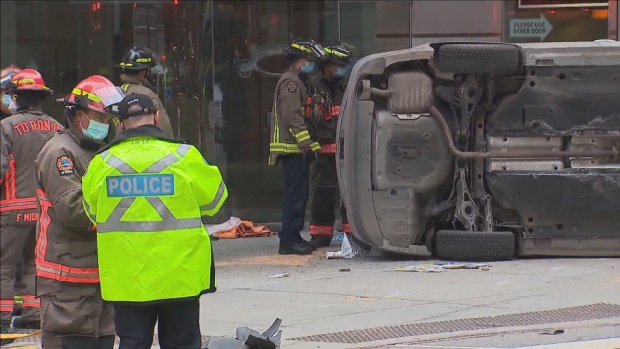 Toronto police have charged a 22-year-old man in connection with a deadly Boxing Day collision that saw a vehicle fly into a crowd of pedestrians in the downtown core.

It happened at the intersection of Richmond Street West and Yonge Street at around 2 p.m. on Dec. 26, just as many people were out shopping on the holiday.

Police previously said that a westbound silver Kia being operated by a 22-year-old man collided with a westbound white Hyundai being driven by a 32-year-old man. The Kia was in the left lane and the Hyundai in the centre lane when the Hyundai turned left across the path of the Kia, causing the Kia to roll, police said.

The force of the collision sent the Kia rolling on its side into a crowd of people standing on the sidewalk.

Eight people were taken to hospital, two of them brothers in life-threatening condition. One of them, an 18-year-old man, died of his injuries a few days later.

At the time of the crash, police said the pedestrians were not standing anywhere they shouldn’t have been. One witness told CP24 that the Kia actually “launched in the air” after the initial impact and that it “turned on its side like a missile” before coming to land on the sidewalk.

Both drivers remained at the scene following the collision.

He was scheduled to make a court appearance at Old City Hall earlier Tuesday.