Driver flees scene after colliding with large truck on QEW 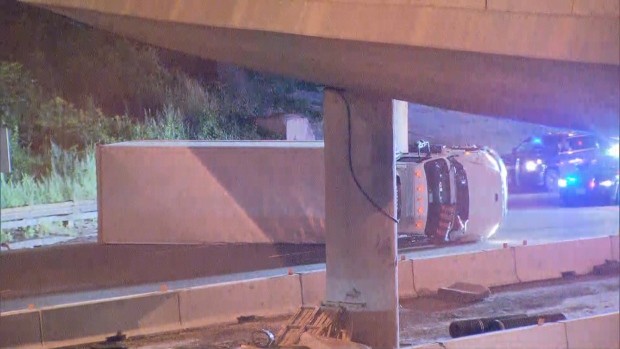 A truck is seen on its side following a collision on the QEW near West Mall on Friday morning.

The Toronto-bound lanes of the Queen Elizabeth Way were closed for several hours overnight after a fail-to-remain collision.

Reports from the scene indicate that a car collided with a large truck on the QEW near West Mall shortly after 1 a.m., causing the truck to rollover.

The driver of the car then fled the scene.

The driver of the truck, meanwhile, was taken to hospital with unspecified injuries.

The Toronto-bound lanes of the highway were closed at West Mall as crews cleaned up a spill at the scene and towed away the truck. The closure was lifted at around 5:30 a.m.

Police continue to search for the driver who fled the scene.