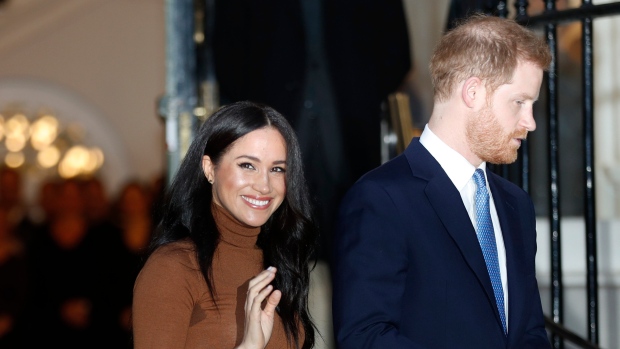 FILE - In this Jan. 7, 2020, file photo, Britain's Prince Harry and Meghan, Duchess of Sussex leave after visiting Canada House in London, after their recent stay in Canada. As Prince Harry and Meghan step back as senior royals, questions linger over the role race has played in her treatment in Britain. (AP Photo/Frank Augstein, File)

VANCOUVER - A women's shelter in Vancouver received a royal visit on Tuesday from Meghan, the Duchess of Sussex, as she and husband Prince Harry plot their part-time move to Canada.

The Downtown Eastside Women's Centre shared a photo of Meghan's visit on Facebook, saying shelter staff spoke with her about issues affecting women in the community.

The group Justice for Girls in the city also posted photos on Twitter of Meghan visiting the organization on Tuesday, saying she discussed climate change and the rights of Indigenous Peoples.

Meghan and Harry announced plans last week to step down from their duties as senior members of the Royal Family and become financially independent.

The move reportedly annoyed senior royals who had not been consulted, sparking a summit that brought together the Queen, her eldest son and heir Prince Charles, and Prince William, who would follow his father Charles to the throne, along with Harry.

In the end, the Queen said she was supportive of the couple's decision to split their time between Canada and the U.K.

The visits in Vancouver are a return to form for Harry and Meghan, who have been heavily involved in charitable works both independently and together.

Meghan was in 2016 named a global ambassador for World Vision - a title she carried through 2017.

Since marrying into the Royal Family, she's focused on charities advancing women's empowerment and gender equality.

And Harry has continued his late mother's work with the Halo Trust, travelling with them to Angola last year, just as Lady Diana Spencer did in 1997.

His areas of focus include “environmental well-being” and social issues that include mental health and support for veterans.

The couple's official website says they plan to develop a charitable entity together this year.