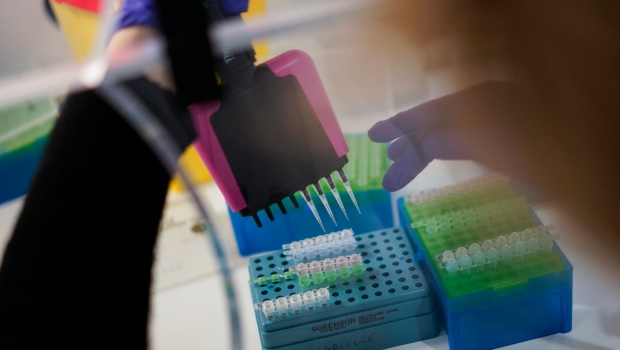 Samples are prepared at a hospital on, Wednesday Jan. 13, 2021, to study the highly contagious COVID-19 variant that has been discovered in the UK. (AP Photo/Daniel Cole)

A Durham Region doctor and her husband have been charged for allegedly misleading contact tracers about how they were exposed to the highly contagious coronavirus variant first detected in the United Kingdom.

Dr. Martina Weir and her husband, Brian Weir, who works in a non-patient-facing role for the Toronto Paramedic Services, each face two counts of "failing to provide accurate information on all persons that the defendant may have had contact with during their period of communicability for COVID-19" and one count of obstruction "by providing false information to the Durham Region Associate Medical Officer of Health in relation to contact tracing involving the UK variant strain of COVID-19."

On Dec. 26, provincial health officials confirmed that a Durham Region couple contracted the UK variant, also known as the B.1.1.7. It was initially reported that the couple did not travel outside the country or had no known exposure or high-risk contacts.

However, it was later revealed that the two had been in contact with a traveller from the UK. Officials said that information was not provided in earlier interviews.

Weir works as a physician at Lakeridge Health Centre and two long-term care homes in the region.

In a statement, Lakeridge Health said Weir did not work at any of their facilities during December nor provided patient care, adding that all staff and visitors at their hospitals go through an active screening process before entering their facilities.

"All COVID-19 prevention protocols were followed to ensure the safety of our team and our patients," Lakeridge Health said.

Meanwhile, a spokesperson for the Region of Durham said there are no concerns about the risk to long-term care residents as Weir did not work between Dec. 11 and Jan. 17.

Weir did go back to work on Monday and Tuesday, the spokesperson told CTV News Toronto.

"All attending physicians, within our four long-term care homes, provide service on a contract basis. This individual's engagement with us as a contractor is under review and they will not be doing any work for the Region until such review is complete," the spokesperson said in a statement.

None of the allegations has been tested in court.

As of Thursday, 15 cases of the B.1.1.7 variant had been reported in the province. At a news conference, Dr. Barbara Yaffe, Ontario's associate chief medical officer of health, said four of the cases have no known travel history, which indicates that it is in the community.

"We do certainly expect to see more as our laboratories test for this and for other variants," Yaffe said.