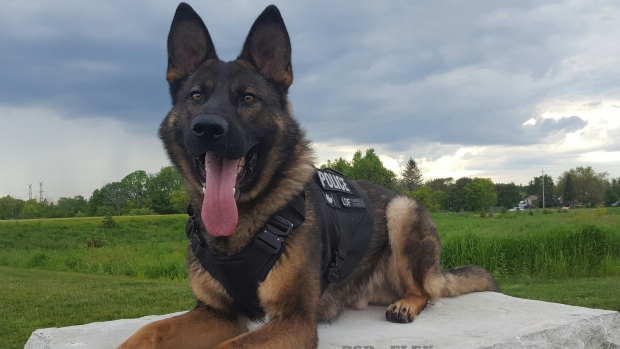 PSD Flex is being credited for catching a suspect who hid in a cornfield after allegedly stealing from a Clarington home on Saturday. (Durham Police)

A Durham police dog is being credited for finding a theft suspect hiding in a Clarington cornfield after allegedly stealing from a nearby home on Saturday.

Police said officers were called around 9 a.m. to a home on Trulls Road, south of Taunton Road, for reports of a break and enter.

Investigators said the homeowner reported finding an unknown man inside the home.

The homeowner, police said, chased the suspect and discovered a second suspect running away from his garden shed.

Police said the homeowner failed to catch the first suspect, losing him in a nearby cornfield.

Several officers arrived at the property, including two K-9 teams.

Police said a dog named Flex followed a scent through the cornfield in rainy conditions and found the first suspect hiding in the field at around 9:35 a.m.

The suspect suffered a minor bite wound when he was arrested, police said, and was taken to hospital for treatment.

Police have identified one suspect as Emmanuel Yihun, 27, of no fixed address. He is facing 30 charges including breaking and entering with intent, theft under $5000, failing to comply with probation and possession of property obtained by crime.

Investigators located gardening tools that were allegedly stolen from the shed as well as several items taken from vehicles located at a neighbour's house.

The second suspect is described as a white male, who is 20 to 30 years old, and is about five-foot-eight with a skinny build, and long, dark hair. He was seen wearing a brown T-shirt and dirty pants.