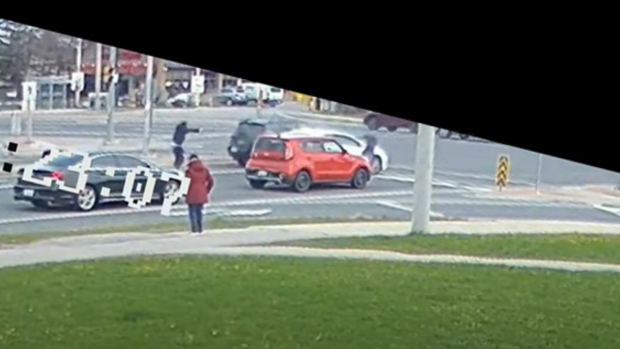 Durham Regional Police have released video footage of a brazen daylight shooting at an intersection in Ajax.

The incident occurred on the afternoon of April 26 near Kingston Road and Harwood Avenue and police say they are still searching for two outstanding suspects.

Video of the shooting, which was released on YouTube, shows two suspects exiting a dark-coloured sedan while stopped the intersection.

The suspects are seen running toward a white car that is also stopped at the light and the pair begin to open fire at the occupants inside the vehicle at extremely close range.

An estimated 40 shots were fired during the exchange of gunfire, police said.

At one point, the driver of the white car begins to drive away and the two suspects run back to their vehicle.

When officers arrived on scene, police say, they found two occupants of the white sedan, a 24-year-old female and a 26-year-old male, suffering from gunshot wounds.

The two were transported to a Toronto area trauma centre with serious but non-life threatening injuries and were subsequently charged in connection with the shooting.

They face numerous charges, including possession of a restricted firearm and discharging a firearm with intent.

Police say when officers attempted to arrest the male victim at the hospital, he assaulted an officer and fled the area on foot. Police allege that during the foot pursuit, the male ran into a residence but was later arrested with the assistance of Toronto police.

The suspect vehicle, which is believed to be a black Hyundai sedan, was later located by Toronto police on Meadowvale Road in Scarborough after it was abandoned and set on fire.

According to police, the suspects fled the arson scene in a white Honda Civic.

Police say the two outstanding suspects are believed to be armed and dangerous and members of the public should not approach them but contact 911 immediately if the two males are spotted.