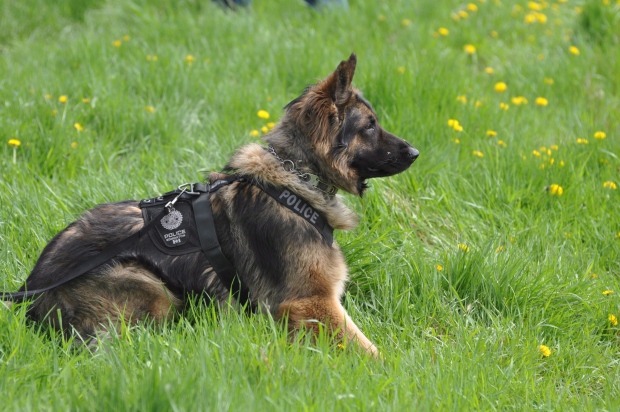 EDMONTON -- Edmonton police dogs and their handlers have performed public demonstrations before, but one on Sunday held special meaning following the fatal stabbing of one of the force's dogs earlier this month.

Many people brought their families to a public park in below-freezing temperatures to get an up-close look at the dogs and to express how much they appreciate them.

"It's sad, obviously, to hear of any kind of any kind of harm to an animal. But these kinds of dogs in particular, they put their lives on the line for all of us," said Wade Rooyakkers, who attended the demonstration with his children.

Quanto, a German shepherd, was stabbed to death Oct. 7 while trying to take down a man accused of fleeing a car with stolen plates.

Staff Sgt. Troy Carriere with the police department's canine unit said officers have been showered with support and sympathy from Edmonton, and from across Canada, since Quanto's death and they wanted to hold the special demonstration to express their gratitude.

Carriere said the support from people has come in the form of emails, gifts at the kennels and support to the Edmonton Humane Society.

"Every night my handlers go out to protect and serve the community, and now when we need the support over the last couple of weeks, the community has stepped up and supported us," Carriere said.

Handlers allowed the dogs to mingle with the crowd and gave permission to pet some of them. One smiling toddler, in her mother's arms and wearing a purple parka, said, Ruff! Ruff!" to one of the German shepherds.

The federal government said in its throne speech this month it will bring forward "Quanto's Law" to protect animals that work with police.

Police complained in Quanto's case the strongest criminal charge that could be laid was cruelty to an animal.

Carriere, who travelled to Ottawa in support of the proposed legislation, said current laws are meant to prosecute people who abuse or torture animals. He said the way they're worded, it's difficult to lay charges against someone who hurts or kills a service animal.

"In 2013, we've apprehended 260 criminals that would have gotten away," Carriere said.

"Without our dogs being able to do the jobs that they do, those guys are back on the street."

Supporters of a new law to protect police dogs weren't hard to find at the demonstration on Sunday.

"The canine unit is important to us. If we don't protect them, who's going to?" asked Tammy Krywiak, who owns several dogs, including a German shepherd guard dog.

Rooyakkers, meanwhile, said he was surprised when he found out there wasn't already a special law protecting police animals.

"These guys are considered police officers as far as I'm concerned," he said.

Quanto is the fifth Edmonton police dog to die in the line of duty. A police dog named Caesar was the last animal killed in 1998.

The throne speech did not specify what Quanto's Law would entail.