The statue of one of the architects of Canada's residential school system was brought down Sunday evening following a downtown demonstration to remember the 215 Indigenous children whose remains were found buried in B.C.

Mohamed Lachemi, the president and vice-chancellor of Ryerson University, said the incident happened an hour after demonstrators left. Thousands gathered in front of the statue at Ryerson University in the afternoon for a sit-in protest.

“A truck arrived on Gould Street and proceeded to pull down the statue of Egerton Ryerson. We are relieved that no one was injured in the process,” Lachemi said in a statement posted on the school’s website.

“The statue will not be restored or replaced.”

A video posted on social media appears to show the moment when Egerton Ryerson's statue was removed. Officers showed up to the scene shortly and took photos of the fallen figure. Police are investigating who is responsible for the incident.

Crowd now gathering and chanting in front of the statue. One person has climbed on top of the base. Small crowd continues to form around it as well. @CP24 pic.twitter.com/TNdsvTTVMH

Lachemi is urging the community to be involved with the Standing Strong (Mash Koh Wee Kah Pooh Win) Task Force, which was created to look into the legacy of Ryerson and make recommendations to the university on how it should respond.

“Their work is now more important than ever. I ask our community to respect their work and to engage with them as we should engage with all matters at our university - through dialogue, debate and the exchange of ideas,” Lachemi said. 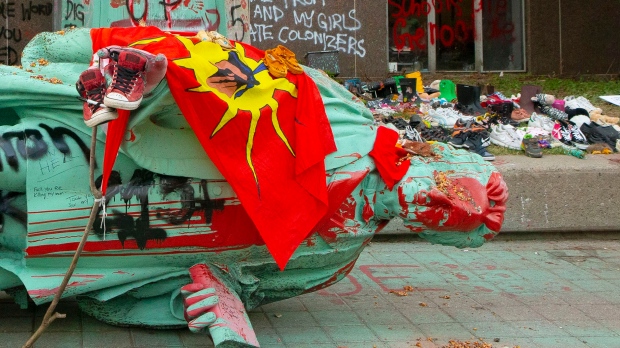 The discovery of the unmarked burial site in Kamloops, B.C. has put the legacy of the university’s namesake back under scrutiny, with students and faculty renewing their call for the statue to be removed and the school’s name to be changed.

Last week, the statue was doused with red paint and marked with graffiti following the discovery of the remains. Children's shoes, representing residential school victims, were also laid down in front of the statue.

Students and professors took Ryerson University out of their email signatures and replaced it with 'X University.' The university’s journalism school said it would rename two of its publications.

The co-chairs of the task force also released a separate statement after the statue was taken down. Joanne Dallaire and Catherine Ellis said they will deliver their final recommendations, including the issue on changing the university’s name, before the fall semester.

“Out of respect for everyone who has participated, we are taking time to thoroughly review all of the submissions from our engagement period while we continue to follow the new statements, petitions and calls for action as they come forward,” they said.

“With the statue removed, there may be regrets that the many students, faculty, staff and community members who have worked tirelessly towards its removal were not offered the opportunity to witness the moment it came down. We recognize that the absence of the statue does not reconcile Egerton Ryerson’s legacy and so we will continue our work.”

Ahead of the sit-in, Sam Howden, one of the organizers of X University and a member of the university's Indigenous Student Association, said the event allows the community to hold space and grieve together.

"I'm hoping that this continues," Howden said. "I don't want this to be picked up moment by moment. I would like this to be a sustainable thing where we see change at the institutional level – to take away the name, to take away the statue, and have a larger conversation about colonial violence and white supremacy in this country and start doing those mechanisms." 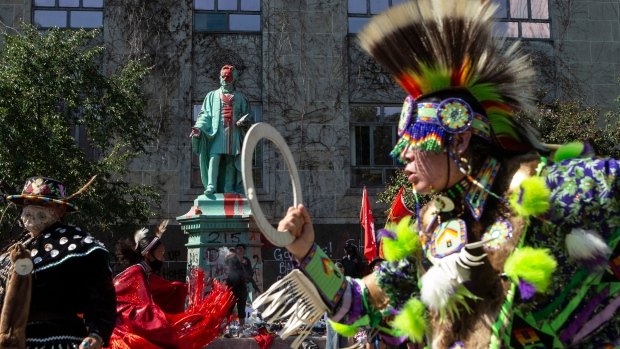 Howden said what was done to the statue was not vandalism.

"It was not some kind of criminal act. It was to bring attention to the violence that has been endured by many different folks because of Egerton Ryerson," Howden said.

Kiyana Johnston, a great-granddaughter of a residential school survivor, wants justice for the “atrocious” acts done against Indigenous people. And she said that means more than an apology.

"Those families need to get their closure and their justice for their son or daughter."

Being related to someone who suffered because of the residential system, Johnston said it comes with a lot of emotion, grieving, hurt and anger. She said there needs to be accountability now. 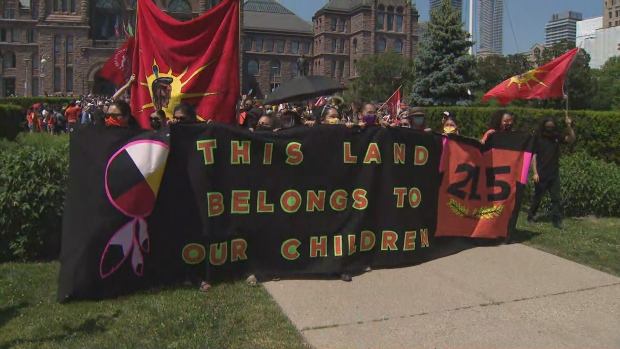 Johnston is also calling out Canadians who say they support Indigenous rights but aren't putting it to action.

"Where are you? We're here today gathering for the 215 children," Johnston said. "You can be here too. You can become one of these allies."

Brianna Olson-Pitawanakwat, one of the protest organizers and an intergenerational survivor, said many residential school survivors are at the demonstration.

"I think this is just a beautiful opportunity for our communities to come together and commemorate those children and to gather and find some healing in an incredibly sad situation," Olson-Pitawanakwat said.

She believes that healing can only happen if there is a complete admission of the truth. And Olson-Pitawanakwat said it begins with the government, the Catholic Church, and other groups who played a role in building the system.

"I think the best thing that this federal government can do is to stop fighting survivors and stop fighting against uncovering that truth," she said.

"Give all the documents up. Give all of the capacity for these schools to be searched and for more bodies of children to be found, and finally lay to rest in a proper way."

People carried signs, including a large banner that read, 'This land belongs to our children,' and chanted 'no peace on stolen land' as they marched through downtown streets. The demonstration then made its way to Ryerson University, where they joined the sit-in. 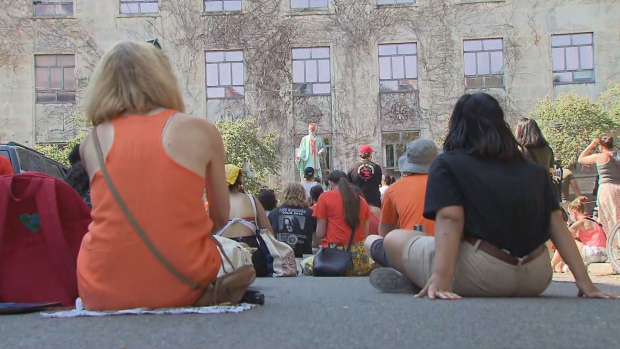 Suzanne Smoke, the president of the American Indian Movement Southern Ontario, said it was important for her and her daughter to be at the demonstration to mourn the lives of the children who died.

"Those were our children. Those were our next seven generations and they're lost. And how many more are we going to unearth," Smoke said.

As long as the federal government continues to fight Indigenous people in court, there is no true reconciliation, Smoke said. The Liberal government is fighting several tribunal decisions, including a ruling that orders Ottawa to pay $40,000 each to some 50,000 First Nations children separated from their families by a chronically underfunded child-welfare system.

"When is the government going to actually really do that work to reconcile," Smoke asked. "We're not seeing it. Reconciliation is dead. There is no such a thing here."

Mass held for the 215 children

The archbishop for Toronto held a mass Sunday morning to remember the children. In an interview with CP24 after the service, Cardinal Thomas Collins apologized for what happened.

"I think we're all so sorry that this event happened, this whole system was put in place. And I think we as Christians need to be particularly regretful and sorry and concerned that we took part in that system because it was a government program that really was very much centralizing and all that. It took little children away from their families," Collins said.

"You can't read minds to the past, but I don't know what the religious groups, the Catholic groups and others were thinking. They probably wanted to advance their mission but to be involved in something that took kids away from their families. That's everything we stand for is the family and those poor kids were taken away. So, I'm just so sorry that happened."

He also called Prime Minister Justin Trudeau's comments “unfair” and not very helpful in moving the process of reconciliation forward. Collins added that the church had previously apologized to the Indigenous community for its role in the residential school system.

Last week, Trudeau said he was disappointed as a Catholic that the church for failing to take responsibility for its part in the residential school system and urged the Vatican to release the documents it has. Collins said the prime minister's statements were based upon "misunderstandings or misinformation." 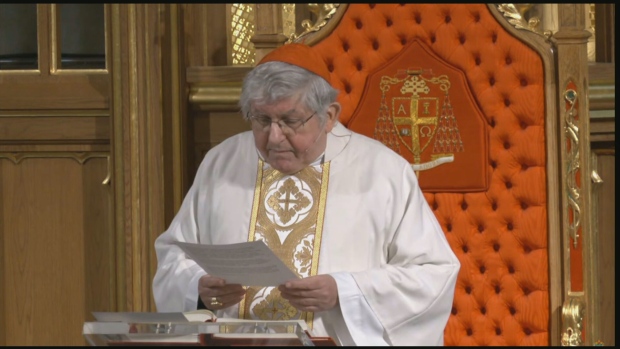 Collins noted that if the church has additional records on Canada's residential schools, then they should be shared.

Meanwhile, during his remarks in front of people gathered in St. Peter's Square, Pope Francis expressed his pain over the discovery of the remains but did not offer an apology.

- with files from The Canadian Press and The Associated Press