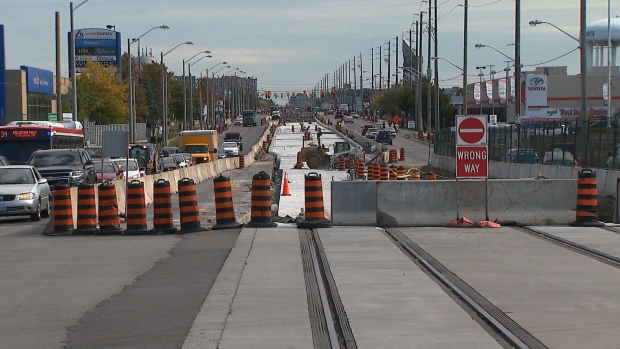 Eglinton Avenue East has once again been voted the worst road in Toronto.

On Thursday, CAA released its annual list of the worst roads across the province based on online nominations and votes from Ontario drivers.

The list is part of the auto club’s advocacy campaign to raise awareness about what roads are in need of improvements, including repairs and repaving.

This is the second year that Eglinton Ave. E. topped CAA’s top five worst roads list in Toronto after it was voted the city’s worst road in 2019.

CAA did not compile any worst roads lists in 2020 due to the COVID-19 pandemic.

Here is a list of the top five worst roads in Toronto for 2021:

CAA also released its top 10 worst roads in Ontario with Victoria Street in Prince Edward County topping the list due to its potholes and crumbling pavement.

Taking the second and third place spots are Carling Avenue in Ottawa and Barton Street East in Hamilton, respectively.

CAA says there are a lot of newcomers on the list this year which could be due to the pandemic.

"We have seen now two roads in Prince Edward county make our provincial top 10 list. And this is largely due to the localized traffic patterns that have existed throughout the pandemic," Raymond Chan, manager of government relations for CAA SCO told CP24 on Thursday.

Chan attributed Ottawa's multiple roads on the list to the many government workers who are still going into work instead of working from home.

"I would imagine that a lot of those folks are still traveling to and from where they're going and using some of those roads each and every day, which is why they're reflected on the worst roads list this year," he said.

In 2019, Eglinton Ave. E. topped the provincial list but moved to the fifth spot this year.

Roads in 117 municipalities across Ontario were nominated for CAA’s worst roads list this year.

The CAA says drivers accounted for the majority of votes, while cyclists and pedestrians represented about a quarter of the votes.

Eighty-one per cent of voters cited potholes or crumbling pavement as their top reason for voting on a road, followed by traffic congestion (11 per cent) and no or poor walking infrastructure (seven per cent).

City crews repair a pothole in the Yonge and Sheppard area in this file photo. (Peter LeClair/CTV News Toronto)