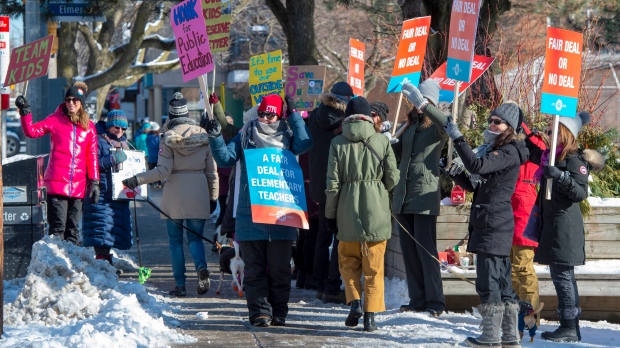 Public elementary school teachers in Toronto will hold back-to-back one day strikes next week if a deal is not reached with the province on a new collective agreement by then.

The Elementary Teachers’ Federation of Ontario (ETFO) has announced that all 83,000 of its members will be walking off the job for one-day on Feb. 6 as part of a province-wide strike.

The latest escalation, however, won’t be the only interruption to learning next week.

The union says that it will also continue to hold rotating one-day strikes in dozens of boards.

Similar one-day walkouts will also hit the Halton District School Board on Feb. 3 and the Peel and Durham district school boards on Feb. 4.

The walkouts are in addition to a slate of one-day strikes planned for this week, including one that will affect the Peel and Hamilton-Wentworth school boards on Jan. 31.

“It’s time that the Ford government recognized that our public education system is key to the future of this province’s economy,” ETFO President Sam Hammond said in a press release announcing the escalation of job action. “We must have the tools and supports to prepare students to realize their individual aspirations and productively contribute to the economic and social fabric of this province.”

The ETFO has been conducting a work-to-rule campaign since November but only escalated their job action to include one-day rotating strikes earlier this month, joining members of the Ontario Secondary School Teachers’ Federation who had been doing so since early December.

In the release announcing the latest escalation, Hammond said that “educators and parents are not going to accept the government’s deep cuts to public education.”

He also slammed the province for “avoiding meaningful and fair contract talks.”

“From ETFO’s perspective, fair contract talks must include: appropriate funding for special education; a strategy to address classroom violence; maintaining our internationally recognized kindergarten program; fair hiring practices; class sizes that meet the needs of elementary students; and compensation that keeps up with inflation,” he said. “I challenge the minister to send his negotiators back to the table to address these issues because in four months of talks from August through December 2019, his negotiators had no mandate to discuss them.”

While ETFO has criticized the province for providing negotiators with “no mandate” to discuss key issues, Lecce has said that the union has needlessly escalated job action at the expense of students.

He has also suggested that the union leadership is being unfair in seeking an inflation-based pay increase, rather than the one per cent hike the Ford government has offered to all four public teacher unions.

“Repeated escalation at the expense of our students, to advance higher compensation, higher wages, and even more generous benefits, is unacceptable for parents and students in our province,” he said in a statement issued on Monday afternoon. “We firmly believe students should be in class, which is why we continue to stand ready to negotiate to reach a deal Ontario students deserve.”

Here is the full list of job action announced by the ETFO on Monday: