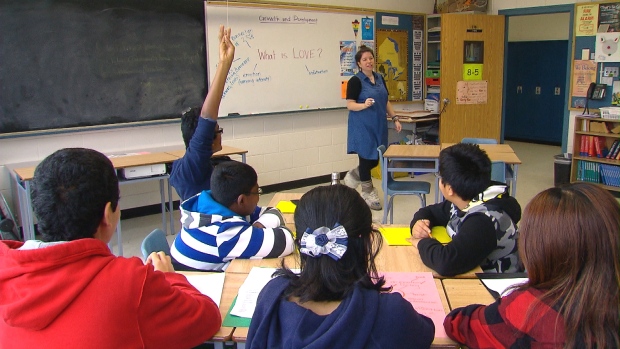 The president of the Elementary Teachers' Federation of Ontario said bargaining with Premier Doug Ford's Progressive Conservative government has reached a virtual standstill.

Sam Hammond said incremental progress was made during discussions over the summer but that has changed in recent weeks.

"ETFO has been clear at the bargaining table about what we want to achieve," Hammond said in a statement. "ETFO expects the same clarity from the Ontario Public School Boards' Association (OPSBA), Council of Trustees' Associations (CTA) and the government but we're not getting it on many very important issues at this point."

Hammond said the government has told the union it's seeking cuts of up to 2.5 per cent in overall education spending and as part of that it has asked teachers to agree to $150 million in reductions to their collective agreement.

"Government representatives at the bargaining table have been asked, point blank, whether the Ford government intends to make funding cuts to elementary education in 2020," he said. "All we are getting are evasive non-answers. That is completely unacceptable."

Education Minister Stephen Lecce's office did not immediately respond to a request for comment.

Lecce has previously called on all parties to reach a deal as soon as possible "to provide predictability and confidence to parents, students and educators alike."

The union -- which represents 83,000 public elementary teachers -- has been holding strike vote meetings throughout the province since September and said the results will be announced in early November.

NDP education critic Marit Stiles said ETFO's request means the government is not doing the hard work required to get a deal.

"What is it going to take for this government to realize how serious and important this is to Ontarians?" she said. "This is a priority and we want our students in schools."

"While teachers are standing up against cuts and larger class sizes, it appears as if the government is being cagey about its commitment to high-quality education," he said in a statement. "Good faith negotiations require both sides to be upfront and honest about their positions."

Contracts with a number of education sector unions expired Aug. 31 and negotiations are currently at various stages.

The ETFO and other major education unions have been critical of the government's overall direction since taking power last June, including recent moves to increase class sizes for Grade 4 and higher, mandate e-learning courses and reduce per-student funding to boards.

Earlier this week, the union representing public high school teachers said it would also be holding a strike vote, with leadership accusing the government of not addressing significant issues during talks.

Last week, the union representing 55,000 education workers reached a tentative deal with the province shortly after giving a strike notice. Under the deal, CUPE agreed to a one per cent wage increase and secured millions in government funding to restore as many as 1,500 jobs cut by the Tories.