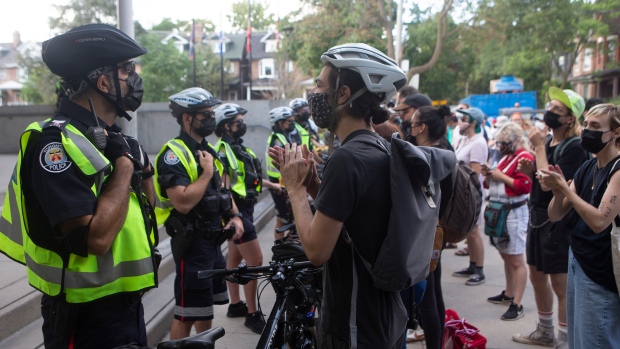 Encampment supporters gather outside Toronto Police's 14 Division to demand the release of colleagues who were detained as police and city workers cleared the Lamport Stadium Park homeless encampment in Toronto on Wednesday, July 21, 2021. THE CANADIAN PRESS/Chris Young

A group representing Toronto’s encampment residents is calling for Mayor John Tory’s resignation following the clearing of a number of public parks in recent weeks, which they have described as a “brutal assault” on the city’s homeless population.

The group, which includes several homeless rights advocates and more than a dozen community outreach organizations, made the call in a letter published Monday as they gathered to protest the encampment evictions at City Hall Monday.

“John Tory says the City clears encampments because they are unsafe. But at evictions across Toronto, they have shown that safety is the least of their concerns,” the letter read.

The city’s latest effort to rehouse those living in encampments took place on Wednesday at Lamport Stadium, near Dufferin and King streets, and saw two of the 11 occupants of the park accepting a referral to a shelter or hotel program. The city said that five people already had a space in the shelter system, three people left of their own accord and one person declined an offer of permanent housing.

Meanwhile, after hours of peaceful protest, clashes between protesters and police in the area were observed leading to 26 arrests with many condemning what’s been labelled as an extreme use of force by police to remove demonstrators.

A day earlier, nine people were arrested as the city worked to clear an encampment at Alexandra Park, an effort that saw 11 of 26 people living in the space accept admission into either a shelter or hotel program.

In June, Tory defended the clearing of an encampment at Trinity-Bellwoods Park by saying that the response was “reasonable, firm, but compassionate,” despite clashes between demonstrators and police, some who were on horseback, some clad in full riot gear, and after pepper spray was reportedly used against those demonstrating.

Critics of the city’s approach to the clearing of these encampments, which include advocates and councillors alike, say that occupants don't feel safe in the city's overflowing shelter system.

“They are brutalizing people indiscriminately, including the residents of encampments. Tory has compared what happened at Lamport to the previous day’s eviction at Alexandra Park, saying the former was only violent because of the presence of protesters. This ignores the reality that forced displacement is in itself violent,” the group said.

Other recommendations made by the group Monday include:

Those recommendations were echoed in a separate letter penned by councillors Shelley Carroll, Mike Layton, Josh Matlow, Gordon Perks and Kristyn Wong-Tam released Friday, in which the mayor was asked to adopt a nonviolent approach to clearing out encampments across the city.

“There is absolutely no need for batons, pepper spray or even guns, not when the work should be done by the City’s Streets to Home staff and other outreach workers,” the letter read.

However, and despite a welcoming message to protesters in attendance at City Hall Monday, Tory said the clearing of the city’s encampments would be easier if protesters didn’t show up.

“I know this for sure, and people don’t like it when I say it, but I’m just being straightforward about it, where we have the opportunities to go and clear encampments and hundreds of protesters don’t show up, and don’t say when they come to city staff that they’re seeking a confrontation with the police, and don’t try to resist the efforts of hard-working, compassionate city staff to voluntarily rehouse people, then we have a lot higher success rate with people actually getting rehoused, which is the real objective, than we do when they show up and decided to cause a ruckus.” Tory said.