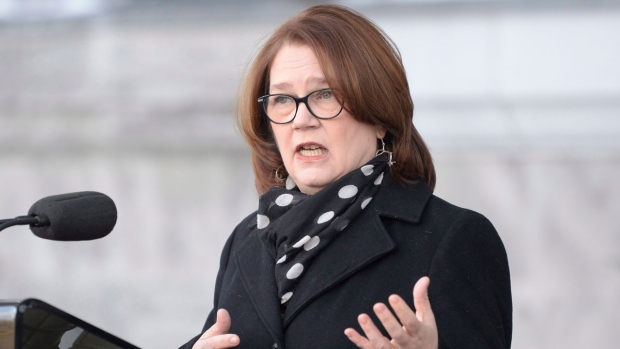 Jane Philpott addresses the media following a swearing in ceremony at Rideau Hall in Ottawa on Monday, Jan. 14, 2019. THE CANADIAN PRESS/Adrian Wyld

OTTAWA -- The federal ethics law has put a crimp in Jane Philpott's plan to put her experience as a former minister of health and Indigenous services to work for the benefit of a northern Ontario First Nation.

Just two weeks ago, Philpott announced that she was taking on a new role as special health adviser to the Nishnawbe Aski Nation, which comprises 49 remote communities in northwestern Ontario.

But now she says her work for NAN will have to be strictly voluntary.

That's because her new job ran afoul of the Conflict of Interest Act, which stipulates that former ministers must adhere to a two-year "cooling off period," in which they must not work for, contract with or serve on the board of directors of any entity with which they had "direct and significant dealings" during their last year as a minister.

Philpott, who failed in her bid to win re-election as an Independent on Oct. 21, resigned from Prime Minister Justin Trudeau's cabinet last March over the SNC-Lavalin affair. In the previous 12 months, she had served as Indigenous services minister and, briefly, as president of the Treasury Board.

Prior to that, she also served as Trudeau's health minister.

Throughout her time as a minister, she had extensive dealings with NAN, including signing onto a charter committing the federal government to work with the First Nation and the province on transforming the way health care is delivered in NAN communities.

The Conflict of Interest Act allows ethics commissioner Mario Dion to waive or shorten a former minister's cooling off period if he deems it to be in the public interest but Philpott says he refused her request for a waiver.

"Ultimately, it was my decision in the end to say, because of my role as both minister health and minister of Indigenous services, that I had been acquainted enough with Nishnawbe Aski Nation in those roles that ... it would not be appropriate at this stage for me to take any remuneration from them," Philpott said in an interview.

Volunteering her services "allows me to continue to work with them and not to worry about the conflict issue."

Philpott said she's not sure the cooling off period, imposed with the creation of the Act in 2006, was intended to apply in situations like her planned work for NAN.

"I think it was probably thinking more of for-profit corporations benefiting from the participation or the future work of a previous office holder. So, this is a little bit different circumstance."

NAN Grand Chief Alvin Fiddler is also not convinced that the cooling-off provision -- aimed at ensuring a former minister doesn't profit from, or help an outside entity to profit from, inside knowledge about government operations and policy -- was meant to apply in a case like this.

"She was never planning to profit from this venture," he said in an interview.

"I think it's just recognizing the severe conditions and the challenges that exist in the Nishnawbe Aski Nation when it comes to access to quality health care and it's her commitment to follow through on the work we started when she was a minister.

"We're not in this to make any money. We're just trying to fix some long-standing problems."

Fiddler said NAN would have preferred to hire Philpott's services full time and will now have to develop a new work plan for her that will involve a more limited time commitment.