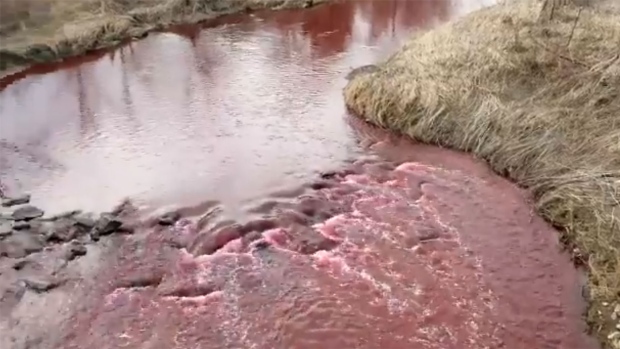 The Etobicoke Creek runs red following an ink spill Tuesday March 24, 2020 in this image captured by a passerby. (@adamcarson0205 /Twitter)

Hikers passing by a creek in Mississauga Tuesday came across a decidedly biblical-looking scene.

Instead of its normal colour, the Etobicoke Creek was flowing bright red.

Video sent to CP24 by a viewer showed the flowing water running red in the creek, which straddles several municipalities west of Pearson International Airport.

@CP24 @CTVToronto Hi the Etobicoke Creek is all red??? pic.twitter.com/M3i1qvtAyW

According to Peel Public Works, the blood-red river was not brought on by divine intervention, but rather by a spill.

The agency said 400 litres of red ink spilled into the creek.

“The Ministry of the Environment and Conservation and Parks are on site and cleanup is underway,” Peel Public Works said in a tweet.

Approximately 400L of red ink was spilled into the Etobicoke Creek. The Ministry of the Environment and Conservation and Parks are on site and clean up is underway.

According to the Twitter user who posted the video, the unusual scene was visible in a stretch of the creek near Dixie and Brittania roads.

Social media users were quick to respond with quips referencing the bible, including several pointing out that the appearance of the red river comes just two weeks ahead of the Passover holiday, which recalls the biblical story of the ten plagues.

“Don’t forget the swarm of locusts,” another chimed in.

“An accident occurred at a factory and the ink spilled,” the agency said. “The creek was checked and there were no dead fish or other wildlife seen by either Peel staff, Ministry of Environment or Conservation and Parks staff.”