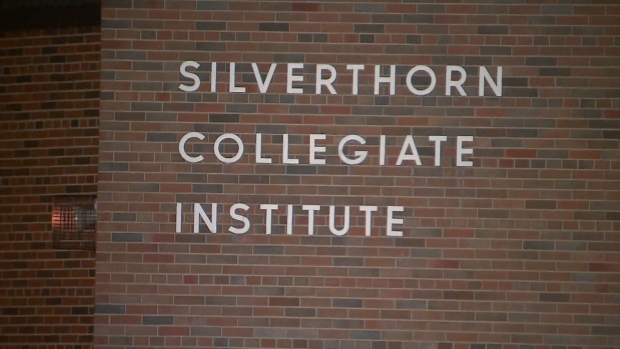 An Etobicoke secondary school that has been closed for the last week due to a COVID-19 outbreak is set to welcome back students tomorrow.

The Toronto District School Board has confirmed that Silverthorn Collegiate Institute will be reopening for in-person learning on Tuesday morning, following an extensive investigation.

The school had reported 11 student cases of COVID-19 when it closed last week but there have not been any new cases reported since then, even after the school made rapid tests available to all students and staff.

The circumstances surrounding the outbreak remain somewhat unclear, though Toronto’s Medical Officer of Health Dr. Eileen de Villa has previously said that all but two of the cases appeared to be the result of “student to student transmission” with some multi-grade events both inside and outside of the school possibly providing “an opportunity for transmission.”

Toronto Public Health says that rapid tests will continue to be available to all students and staff as classes resume in person tomorrow.

“Rapid Antigen Tests are an additional layer of protection given the recent increase in cases and whole school dismissal,” they said in a message posted to Twitter on Monday afternoon.

In the meantime, Toronto Public Health said Monday evening that they have declared COVID-19 outbreaks at three more schools, though those schools remain open.

“We're carefully investigating & following our process of working w/our school community to notify close contacts & ask them to stay home, monitor for symptoms & get tested,” the health unit said in a  tweet.

The Ministry of Education says that there were 88 school-related cases confirmed over a 24-hour period ending on Friday afternoon, down from 117 cases during the same time-period last week.

The number of active cases associated with the public school system now stands at 1,255, accounting for roughly one-third of Ontario’s overall caseload. That number had previously peaked at 1,637 two weeks ago but has been declining gradually since then.

It should be noted that the total number of cases associated with schools is still well ahead of where it was at this point last year – 3,692 versus 1,569. However, the trend line now appears to be pointing in the right direction, unlike last fall when there was a sustained acceleration in cases among students and school staff that eventually led to the closure of all schools following the December holiday break.

Currently there are only two schools closed due to COVID-19 outbreaks, including Silverthorn Collegiate Institute. The other is Etobicoke's Greenholme Junior Middle School.

But a count by CP24 reveals that there are at least 177 additional classroom cohorts self-isolating in the Greater Toronto and Hamilton Area due to positive cases.

In total, there are 638 individual schools with at least one positive case, accounting for about 13 per cent of all schools.

The education level of respondents also seemed to play a role in their intentions.

The survey would seem to suggest there could be some challenges ahead as Health Canada mulls over data recently submitted by Pfizer regarding the use of its COVID-19 vaccine among children ages five through 11.

In Ontario more than 83 per cent of eligible residents are fully vaccinated but the uptake has been slower among children ages 12-17. Only 76.1 per cent of that group is fully vaccinated, making them the cohort with the second lowest rate of vaccination next to those 18-29.

Toronto Public Health has previously said that it has already formed a working group to prepare for vaccines being approved for children ages five through 11. In Toronto about 200,000 children are in that age group.

The Angus Reid survey is based on the responses of 5,011 Canadians and is considered accurate to within two percentage points, 19 times out of 20.