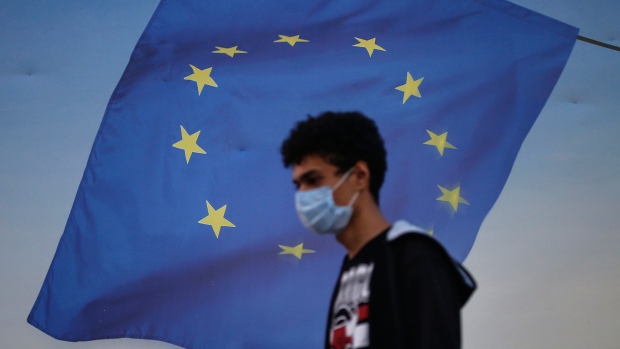 Backdropped by a poster with a European Union flag, a youth wearing a mask to help protect against the spread of coronavirus walks in Istanbul, Friday, Oct. 2, 2020. THE CANADIAN PRSS/AP/Emrah Gurel

OTTAWA - The European Union's council has re-imposed a travel restriction on Canada as it battles a second wave of the COVID-19 pandemic.

The move reverses a decision in June that lifted entry restrictions on a number of non-EU countries, including Canada.

The Canadian Press has obtained a memo form Council of the European Union, dated Wednesday, that says Canada, along with Georgia and Tunisia were being deleted from a list of countries from which travel had been permitted.

The memo says the decision was taken as part of a regular two-week review process.

It says the commission consulted with relevant EU agencies and services.

The memo also says the EU will now allow travel from Singapore.

This report by The Canadian Press was first published Oct. 22, 2020