'Every one of us was a Mahsa': Iranians in Canada cut hair at women's rights rallies 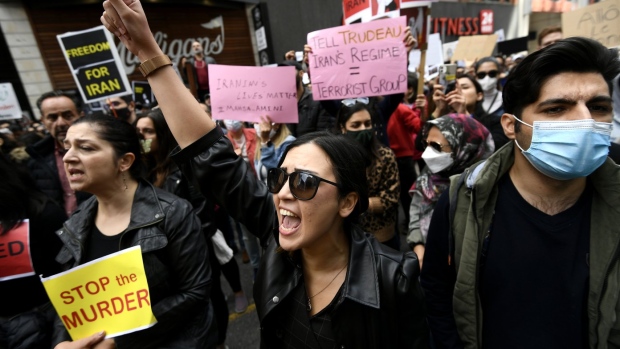 Members of the Iranian community and their supporters rally in Ottawa on Sunday, Sept. 25, 2022, in solidarity with protesters in Iran, where 22-year-old Mahsa Amini died in police custody for allegedly improperly wearing a hijab. THE CANADIAN PRESS/Justin Tang

Azin Rezaeian kneels on the ground and screams "Say her name" each time she snips off a chunk of her long black hair.

A crowd around her shouts back "Mahsa Amini," the 22-year-old woman whose death in Iran has sparked protests like this one around the world.

Rezaeian, who moved to Ottawa about a year ago from Iran, shared the video of herself to draw attention to what she said are human rights abuses against women in the country.

It was taken at a rally last week in the capital, one of many demonstrations across Canada where supporters have called for decisive action by the government to condemn the Islamic Republic of Iran.

"It's not about Mahsa, it's about all of the women who live in Iran. Every one of us was a Mahsa," Rezaeian said in an interview.

Protests have erupted across Iran since Amini died in police custody this month after being arrested, allegedly because her head scarf was too loose.

In response, women have burned their hijabs during large-scale protests across the country, prompting Iranian security forces to push back amid scenes of violence and street clashes uncommon in the Middle Eastern country.

Prime Minister Justin Trudeau announced Monday that Canada will sanction senior Iranian officials, while some Liberal MPs, including Ali Ehsassi, have said the United Nations must do more on a global scale.

The Conservatives also want Canada to designate the Islamic Revolutionary Guard Corps, a branch of the country's military, as a terrorist group.

Some experts, meanwhile, have warned that both demands may be difficult to implement.

Rezaeian, who said she was arrested eight times by the morality police who took Amini into custody, said she wants the Canadian government to be a voice for women in Iran.

The first time she was arrested for allegedly wearing her head scarf improperly, she was only 16. The experience turned her into an activist for women's rights, she said.

Rezaeian said she now fears for friends who are in custody, including a journalist whose photo of Amini in hospital drew international attention. Rezaeian said she didn't want to leave Iran or her family behind, but she moved to Canada for fear of the police.

"Every night I have a nightmare about prison, I have nightmares about my friends who are in prison," she said.

Rezaeian isn't alone in hoping to draw attention to the issue in Canada. Thousands gathered for a rally in Vancouver on the weekend, while others have protested in Edmonton, Montreal and Toronto.

An Iranian student at Simon Fraser University in Burnaby, B.C., who asked to be referred to only as D.D. because she fears for her safety, joined others in taking scissors to her hair.

The gesture is a nod to Amini, who was allegedly arrested because her hair peeked out from her hijab. D.D. said she cut her hair to symbolize the pain Iranian women are feeling.

"That was basically the only thing I could do at that moment to make this, our word, spread more so people realize we are suffering from some pain," D.D. said.

Another woman who participated in the protest at the Burnaby campus said she hopes the rallies help amplify the message of protesters in Iran.

"We want to reach out to every country to ask their governments not to negotiate with this regime," she said.

She also said she wants to see repercussions for anyone with links to the morality police living in Canada. That wish was echoed by Rosa Kheirandish, one of the organizers of the protests in Ottawa, who said the protests were not about getting rid of head scarfs.

Kheirandish added that she fears there will be more deaths in Iran, where internet access has been cut, making it more difficult to get updates on the situation on the ground.

However, she also said she has been heartened by the movement in Canada.

"I never knew that many Iranian people lived here in Canada. We never gathered for any cause like this, we were never united like this," she said.

Additional rallies are planned in Ottawa for Oct. 2 and Oct. 4, she said.