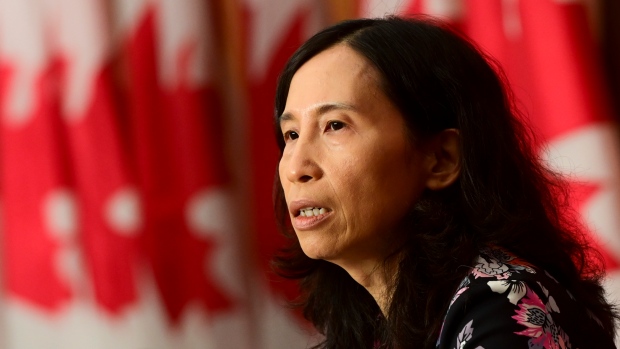 OTTAWA - Canada's chief public health officer says messages on how to keep safe during the COVID-19 pandemic might seem inconsistent, but that's because the epidemiology is different across the country and the science on the virus has evolved.

“We have been criticized as public health professionals for changing our advice over time,” Dr. Theresa Tam said Thursday.

“We have been doing so because the science is evolving.”

Speaking at a journalism conference at Carleton University in Ottawa, Tam said public health officials had to change their advice regarding wearing non-medical masks when epidemiologists came to understand that asymptomatic people can transmit the virus that causes COVID-19.

“This kind of change, I think, is to be expected,” she said. “Science is playing out in real time in front of TVs and the internet.”

Scientists don't have the luxury of debating things behind closed doors and in peer-reviewed journals as every event related to COVID-19 is being reported to the public in real time, Tam said.

When an adverse event happens during a clinical trial of a vaccine candidate, it gets reported right away, she said.

“Normally, you actually had a very thoughtful process of evaluating of these things and then communicating it,” she said. “That is extremely challenging.”

Public health officials have to make their messages clear because if they don't people will have their own intuitive views on what makes sense and they will make their own decisions on how to behave under certain circumstances, Tam said.

She said messaging and advice can appear inconsistent because the pandemic is different in different parts of the country and authorities apply responses to match.

“We are living in a more challenging period right now - to convince people who are fatigued to stick to sustainable habits or public health practices.”

Tam said misinformation can travel faster than the virus on the internet, making it more challenging for public health officials to communicate.

“We needs to sharpen our social media skills, if we're going to combat misinformation in that sphere,” she said.

The rapidly evolving situations during COVID-19 pandemic have also created fertile ground for conspiracy theories to grow, Tam said, adding that the problem is not a lack of information, but too much of it, making it hard for people to know what is credible.

People should really either spend a lot of time doing research, or rely on credible sources who can provide in-depth analysis that translate complex scientific information, Tam said.

Unreliable sources usually cherry-pick bits of information that fit their narrative, she said, while scientists and journalists present each side of the argument and tell you what is known and unknown.

Unrealistic expectations are also making communicating with the public during the pandemic more difficult.