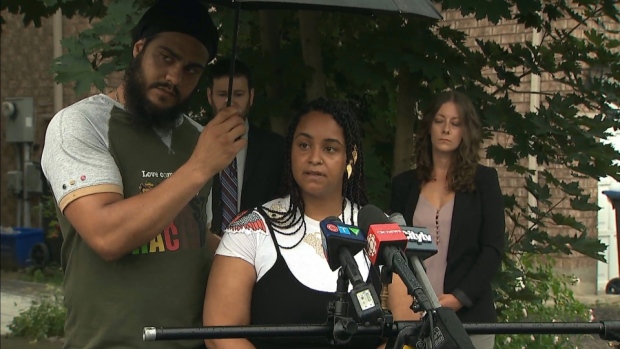 Chantelle Krupka speaks at a microphone with her partner Michael Headley in Mississauga on June 23, 2020. (CTV News Toronto)

A former Peel Regional Police constable has been charged by the province’s police watchdog after a Black mother was shot in the abdomen in front of her Mississauga home this past Mother’s Day.

On May 10, Chantelle Krupka said she was engaged in an argument over text message with her former partner and father of her son, about whether her son could visit her that day.

She says her former partner called the police on herand officers arrived at the home on Ledbury Crescenta short time later.

She said officers demanded she come outside to speak with them, but that she was not under arrest.

She and her partner then exited the house to speak with the officers.

Krupka said she told officers to leave because they were trespassing, while one of the officers drew a stun gun at her partner, Michael Headley, and told him to go back inside.

Headley was later struck with the stun gun, and Krupka said she was struck as well as she tried to get back inside her home.

Now on the ground, Krupka said she pulled the conductive barbs from the stun gun out of her skin and reached out for her partner when another officer drew her handgun and shot her in the abdomen.

“Without any warning, officer Jane Doe shot me. The bullet went into my abdomen. I was in absolute shock. I froze and simply kept asking the officer ‘why?’ She did not respond,” Krupka said last month.

Krupka was brought to hospital and treated for her wound, while her partner was detained for the night by police.

“I believe that the charges against Michael and myself were laid in an attempt to paint us as criminals and create an after-the-fact justification for the excessive use of force against us,” Krupka said in a statement issued through her lawyer last month. “Even if there were any merit to the charges, which we absolutely deny, the use of force was excessive and outrageously abusive. We did not deserve to be Tasered. I did not deserve to be shot.”

Peel Regional Police allege they seized four pounds of marijuana inside Krupka's home after she was shot. Krupka said the cannabis was for legal use.

On Thursday, the SIU said it determined charges were warranted in this case.

They identified the constable, who since the incident resigned from the Peel Regional Police Service, as Valerie Briffa.

She was charged with criminal negligence causing bodily harm, assault with a weapon and careless use of a firearm.

She was brought to SIU offices today and released on a promise to appear in court in Brampton on Aug. 4.

She is also prohibited from being near or speaking to witnesses of the incident and cannot possess firearms as defined by the Criminal Code.