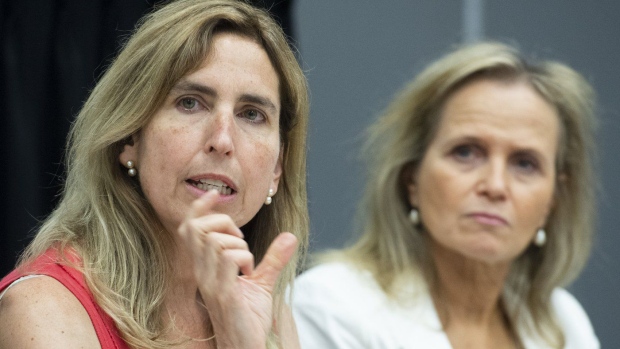 Marina Klein, Research Director and Professor of Medicine at the Division of Infectious Diseases at McGill University, left, and Sharon Lewin, International AIDS Society President-Elect speak during a roundtable discussion on monkeypox the AIDS 2022 conference in Montreal, Sunday, July 31, 2022. THE CANADIAN PRESS/Graham Hughes

MONTREAL - A panel of scientists and activists at the AIDS 2022 conference in Montreal urged worldwide governments over the weekend to ramp up resources to handle the monkeypox outbreaks.

The plea came as international experts gathered on Sunday to discuss the necessity to avoid reproducing mistakes made during the early HIV response.

Marina Klein, research director and professor of medicine at the division of infectious diseases and chronic viral illnesses service at McGill University in Que., said Montreal could set an example as it becomes crucial to improve the monkeypox global response.

“There was a very rapid response in Montreal to address the rising infections, with the implementation of a very liberal and open, accessible vaccine,” Klein said in an interview on Sunday.

But the rate of infections has started to stabilize and hit a plateau in Montreal, Klein said.

“Part of that has come directly from the Public Health Department but also with the involvement of the community, which has been the key to educating about the importance of the vaccine,” she said.

Klein, however, said she worries other provinces, in particular Saskatchewan, won't have the same ease to connect with vulnerable communities.

“Although there are only two cases as far as identified â€¦ we know that in Saskatchewan there's been many challenges, both with HIV and sexually transmitted infections, especially among vulnerable populations including Indigenous communities,” Klein said.

She stressed the importance of community engagement and having a vaccine response ready to go, but also the need to study the extent of monkeypox transmission.

“We did respond rapidly, but nowhere in the world responded rapidly enough to address this and get rid of this in the short time frame that we needed to,” she said.

“Now we are going to have to switch our gear and think about how do we control this over the long term.”

Her criticisms were echoed by several other speakers at Sunday's conference.

Over 19,000 cases of monkeypox have been reported over the last few months from 78 countries, mostly among men who have sex with other men.

“We knew enough to have done a lot better to have contained this thing,” Makofane said in an interview, adding that the general fatigue from fighting COVID-19 made the monkeypox response slower than it should have been.

Makofane also decried thousands of vaccine doses sitting in Denmark while the number of cases continues to climb.

Unlike the numerous companies that made COVID-19 vaccines, Denmark's Bavarian Nordic is the only maker of the vaccine used against monkeypox.

“It's scandalous and it's worse than HIV in the sense that we have the tools to respond,” Makofane said.

Dr. Meg Doherty, director of the World Health Organization's global HIV, hepatitis and STIs programs, told the attendees an equitable approach is crucial to ensure the tools are available not only to wealthier countries, but also in Africa where monkeypox is traditionally found.

“Thirty-five countries have been accessing or asking to have access to the vaccines ... is there a risk that countries who are putting in (requests) for access are coming from rich countries? That's quite a possible risk,” Doherty said on Sunday.

“We want equity. We can't have a monkeypox response that is only responding to the U.K., Canada and the United States.”

The international AIDS 2022 conference - from July 29 to Tuesday - is expected to attract more than 9,000 delegates from around the world, with another 2,000 registered to participate remotely.