Experts caution against the temptation to comparison shop COVID-19 vaccines 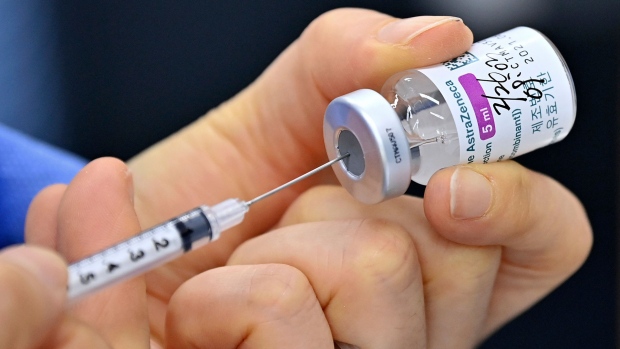 A nurse fills a syringe with the AstraZeneca COVID-19 vaccine at a health care center in Seoul Friday, Feb. 26, 2021. (Jung Yeon-je /Pool Photo via AP)

TORONTO - While it's tempting to compare various aspects of AstraZeneca-Oxford's newly approved COVID-19 vaccine to others, several experts cautioned against focusing on data that is not comparable and the danger of underrating the product's ability to curb hospitalizations and deaths.

Prime Minister Justin Trudeau promised the boost to Canada's pandemic arsenal would mean “more people vaccinated, and sooner,” and would be key to helping contain spread.

Nevertheless, Health Canada chief medical advisor Dr. Supriya Sharma acknowledged questions over how the public should evaluate trial results that show AstraZeneca has an efficacy of 62 per cent in preventing symptomatic cases. That's compared to the 95 per cent efficacy of the country's two other approved vaccines, from Pfizer-BioNTech and Moderna.

But Sharma stressed that all three have been shown to prevent 100 per cent of hospitalizations and deaths due to COVID-19.

“Each vaccine has unique characteristics and Health Canada's review has confirmed that the benefits of the viral vector-based vaccine, as with the other authorized vaccines, outweigh their potential risks,” Sharma said.

Several medical experts including Dr. Stephen Hwang say Canadians do not have the luxury to pick-and-choose as long as COVID-19 cases continue to rage in several hot spots and strain health-care systems.

With multiple COVID-19 projections warning of a variant-fuelled third wave without tighter suppression measures, any tool that can slow the pandemic should be embraced, he argued.

“It would be important for people to be vaccinated with whichever vaccine is first available in their community to them, rather than trying to hold out for a specific vaccine,” advised Hwang, who treats COVID-19 patients at St. Michael's Hospital in Toronto.

The vaccine was not tested on people over the age of 65. Health Canada, however, says real-world data from countries already using the product suggest it is safe and effective among older age groups, promising an update on efficacy in the age group as more data comes in.

“I personally would take that one out as an option for my mom,” said Brum, who is her mother's main caregiver.

“Maybe I am wrong but, I don't know, I don't see that it's more useful. I'd like to see one that has a higher percentage of (efficacy).”

As for herself, Brum said she has allergies that she believes may put her at greater risk of adverse reactions and so she is unsure whether she can take any vaccine.

But she'd like the option of choosing, if possible, even while acknowledging that limited supply could make that unlikely.

“As a Canadian, I would like to see us all have choices, regardless of age, gender, or ability,” says Brum.

“I'm going to wait where I can have more choices.”

He noted that Germany has seen a reported preference among some for the vaccine made by Germany's BioNTech with Pfizer, as well as a misconception that the AstraZeneca vaccine is inferior because of a lower efficacy rate.

“Until we have direct comparison studies where we give people one vaccine versus another and directly compare, it's very difficult to know for sure how it's going to pan out,” he says.

Then there's the fact Canada's initial AstraZeneca doses will be made at the Serum Institute of India, which dubs its version CoviShield, while later packages will be produced at the drug giant's own manufacturing facilities.

Hwang acknowledges that could invite further scrutiny but says the Pune, India-based biotech firm has a “strong track record of producing vaccines.”

Sharma also stressed the similarities between the two shots Friday.

“For all intents and purposes they're the same vaccine,” said Sharma.

This report by The Canadian Press was first published Feb. 28, 2021.