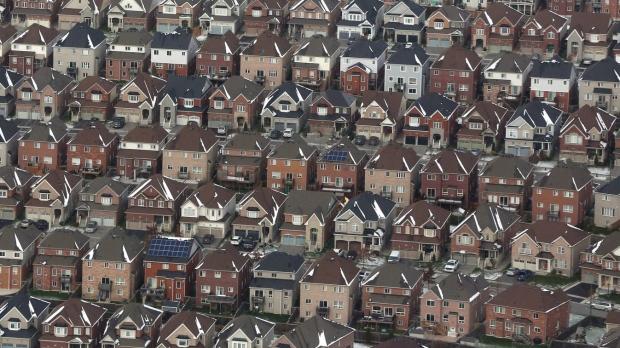 An aerial view of houses in Oshawa, Ont. is shown on Saturday, Nov. 11, 2017. As Canadians who bought a home years ago renew their mortgages, they will almost certainly face higher mortgage rates than when they bought and a rise in their monthly payments. THE CANADIAN PRESS/Lars Hagberg

Canadian homeowners may be in for a shock when it's time to renew their mortgages, since rising interest rates mean their monthly loan payments will likely climb higher, too.

That's particularly unwelcome as rising prices for gas, groceries and other staples are already eating into household budgets.

Experts say extending the amortization period for your mortgage could keep your monthly payments in check even as you face higher interest rates, but caution that doing so comes at a cost as you will end up paying interest for a longer period of time.

Mike Rocha, director of mortgage experience at Scotiabank, says customers renewing today who may have been paying interest at less than three per cent, or even two per cent, are facing the potential for rates over four per cent.

"There's going to definitely be potential payment shock with some customers," he says.

By extending that amortization period when you renew your mortgage, you could take the remaining balance on your loan and repay it over a fresh 25-year period — or perhaps even longer, depending on your circumstances. The move would reduce your monthly payment, but because of the extra time taken to repay the loan, you will end up paying interest over a longer period of time.

If you've made extra payments in the past and are ahead of your original payment schedule, Rocha says you should be able to return to your original amortization schedule. To extend your amortization period beyond the originally contracted period, however, he says the process is a little more complicated.

"You have to qualify, you have to check your credit. There may or may not be an appraisal, that is up to the lender. It is a longer process for sure," he says.

While those with a variable rate mortgage have already seen their rates rise as the Bank of Canada has moved to raise rates, those with fixed rate loans won't see an increase in the rate they are paying until it comes time to renew.

In its financial system review last week, the Bank of Canada noted rising rates could mean a tighter household budgets.

The central bank ran a hypothetical scenario where five-year variable- and fixed-rate mortgages taken out in 2020 and 2021 renewed at median rates of 4.4 per cent and 4.5 per cent, respectively, in 2025 and 2026.

In its simulation, the Bank of Canada says households that took out a mortgage in 2020-21 would see a median increase of $420 or 30 per cent in their monthly mortgage payments on renewal.

However, Ottawa mortgage broker Kelly Wilson noted that even though rates today are higher than they have been in recent years, they are still low in a longer-term context.

"I bought my first house at 21 and I paid 8.3 per cent, that was my first interest rate," said Wilson, managing partner at the Wilson Team.

"It's still cheaper borrowing than anywhere other place you can borrow," she said

Rocha said if you are already extending your amortization period, you could also consolidate other higher interest debt into your mortgage.

"If you're going to be opening up the hood and doing a refinance anyways, you might as well take advantage and do some debt consolidation, if there is some stuff out there and you've got the equity," he said.

Rocha added it is always helps to talk to a financial adviser who can take a look at your whole situation.

"A financial adviser is going to be able to look holistically at the person's, the individual's, financial situation and be able to then apply some judgment on where it makes sense," he says.