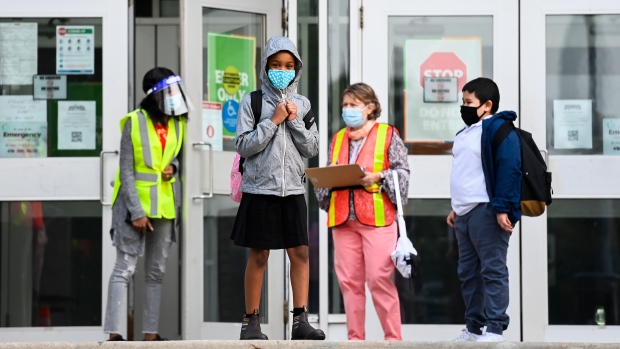 Children wait to enter at Portage Trail Community School which is part of the Toronto District School Board (TDSB) during the COVID-19 pandemic in Toronto on Tuesday, September 15, 2020. THE CANADIAN PRESS/Nathan Denette

Extracurricular activities could soon resume in Toronto schools but public health officials are recommending that “high contact and high intensity” sports be held outdoors only for the time being.

The decision represented a significant pivot from earlier in the summer when Education Minister Stephen Lecce repeatedly insisted that students would return to a school environment more closely resembling the pre-pandemic norm.

The pause, however, turned out to be short-lived.

It says that for the time being individuals from different schools and mixed cohorts should “limit interactions” to the outdoors.

It also says that “high contact and high intensity activities” be limited to the outdoors as well.

That could mean that some sports teams, like basketball or volleyball, won’t be able to resume competition just yet.

But Toronto Public Health says that it is recommending that “low contact and low intensity activities” be permitted indoors, so long as participants wear masks and physically distance.

It says that guidelines should be developed to limit the number of extracurricular activities a student can participate in at one time in order to reduce contacts across different cohorts.

It is also recommending that the resumption of extracurricular activities begin with students between the ages of 12 and 17, given that those individuals are eligible to be vaccinated.

The latest guidance also paves the way for the resumption of field trips, though overnight field trips continue to be discouraged.

In a letter sent to parents on Monday the TDSB’s Director of Education Colleen Russell-Rawlins confirmed that the board will be following the updated recommendations , though she said that “staff at each school will need time to create plans to reintroduce extra-curriculars.”

“The TDSB welcomes the opportunity to re-engage students in extracurricular activities and is currently reviewing the new guidance and will be updating its own directions very shortly,” she promised. “In the meantime, please know that our schools’ first priority is ensuring the appropriate health and safety measures are in place so that activities can be done safely. We will be doing everything we can to ensure the reintroduction of these important activities does not lead to further spread of COVID-19 and will, together with TPH, continue to monitor the situation.”

The new recommendations from Toronto Public Health come as Ministry of Education reports another 138 school-related cases of COVID-19.

That is up from 46 cases reported last Monday, pointing to a possible rise in lab-confirmed infections among students and staff.

It, however, remains unclear how much of a factor the boost in testing volumes that has coincided with the return to school has had on the increasing numbers.

Since the resumption of classes earlier this month, there have been positive cases reported at 444 Ontario schools (about nine per cent of all schools)

On late Friday afternoon Toronto Public Health also declared a fourth outbreak – this one at Scarborough’s St. Lawrence Catholic School – after determining that at least two cases in the school setting were “linked.”

“We're carefully investigating and following our process of working with our school community to notify close contacts and ask them to stay home, monitor for symptoms and get tested,” they said in a message posted to Twitter.

There are currently a total of 717 active cases associated with Ontario’s public schools.