The TTC will make it mandatory for riders to wear face coverings but it is not planning to issue fines or refuse anyone entry to the system at this point.

Mayor John Tory made the announcement during a press conference on Thursday morning, noting that the new policy will go into effect on July 2nd assuming it is formally approved by the TTC board at a meeting next week.

All riders under the age of two will be exempted from the policy, as will anyone with a medical consideration.

The new policy will also be accompanied by a campaign in which one million non-medical masks will be distributed to TTC riders with a particular focus being paid to lower-income neighbourhoods.

“I know in many respects this is still a scary time for people, there are still many unknowns with respect to this virus, but we are doing everything we can to make sure we can tell you that the transit system is safe,” Tory said. “In the end it comes down to people and their own sense of personal responsibility, though. You have to show your responsibility and your concerns for others by making sure you wear a face covering. This is for the health of other people and the health indeed of our entire city.”

Ridership on the TTC plummeted by more than 85 per cent at the outset of the COVID-19 pandemic but has slowly been climbing back up as the province gradually reopens.

“We look forward to welcoming everyone back and I want to make sure that people know that our system is safe for both customers and employees but as we move towards that recovery physical distancing is simply not going to always be possible, especially on our bus fleet,” TTC CEO Rick Leary conceded during Thursday’s press conference. “That is why it will be more important than ever to wear a face covering on the TTC.” 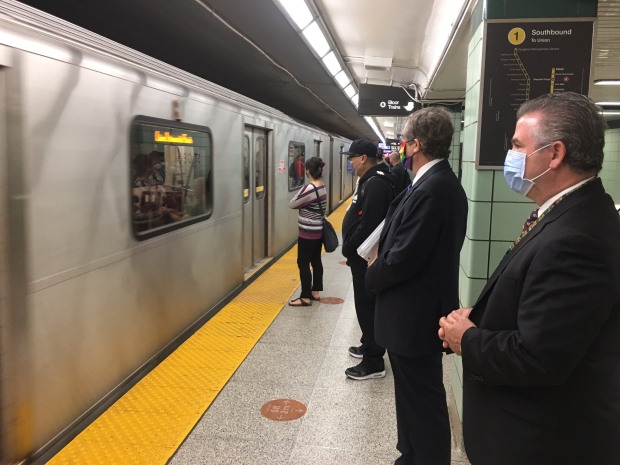 More than half of riders already wearing face coverings

Leary said that about 50 to 60 per cent of TTC customers are already wearing face coverings and he expressed confidence that the remainder will soon follow suit.

He said that in order to ensure that is the case the TTC is planning an “extensive awareness campaign” and will also dispatch 100 “COVID ambassadors” to busy stations to remind riders about the importance of wearing a face covering.

Leary, however, said that there are no plans at this point to stop people without a mask from using the system or to issue fines. Technically, violators of the policy could face a set fine of $195.

“I want to be clear: no one will be refused a ride on the TTC for not wearing a face covering,”  Leary said. “Based on experiences of other jurisdictions where compliance has been high, like New York City, we don’t believe strict enforcement is necessary.”

Policies requiring face masks on public transit have already been announced in Mississauga, Brampton and Hamilton and Markham Mayor Frank Scarpitti has also indicated that he plans to push for a similar requirement on York Region Transit vehicles.

The union representing TTC workers has also been calling for such a policy since early May.

“We are not going to have 10 out of 10 people wearing a mask but even if you have an extra 15 or 20 per cent I think that will go a long way and really decrease the chances of having an outbreak and potentially exposing somebody to COVID-19,” ATU Local 113 President Carlos Santos told CP24 following the announcement. “I think it is a step in the right direction.”

The province is also strongly recommending that public transit riders wear face coverings, though it has left it up to individual systems to decide whether or not they want to make it mandatory.

Speaking with CP24 prior to Tory's announcement on Thursday, infectious disease expert Dr. Isaac Bogoch said that making masks mandatory on transit is a bit of a no-brainer.

“Here are situations where people are going to be congregating in an indoor environment with lots of people close together. Even with our best efforts to physically distance on transit it just might not be possible so I am a firm believer of wearing masks there," he said.