Facts about the other Ford: A look at mayoral candidate Doug Ford

Coun. Doug Ford on Friday entered the race to become Toronto mayor, hoping to succeed his more famous brother, Rob Ford, who ended his mayoral re-election bid after the discovery of a "fair sized" tumour on his abdomen. Here are some facts about the lesser-known Ford:

FAMILY BACKGROUND: Doug Ford was the second son of Diane and Doug Ford. Sr., who rose to become prominent members of Toronto's business community. Doug Sr. co-founded an adhesive products company, Deco Labels and Tags, and went on to become a Conservative MPP in the Ontario legislature from 1995 to 1999. Doug Jr. grew up in the Toronto suburb of Etobicoke and attended high school at Scarlett Heights Collegiate Institute.

BUSINESS BACKGROUND: Ford's council biography says he has 25 years of business experience, much of it gained at Deco. He worked his way through the ranks and eventually took over from his father as company president. During his time there, he oversaw Decco's expansion into the U.S. market by opening offices in Chicago and New Jersey.

POLITICAL CAREER: Ford was elected to Toronto city council in October 2010, taking over representation of the ward once held by his brother, Mayor Rob Ford. Doug Ford's ensuing four years in council saw him become a vocal champion of his brother's socially and fiscally conservative agenda. While his embattled brother made more headlines for his struggles with substance abuse, Doug Ford's off-the-cuff remarks were at the centre of some local controversies. When internationally acclaimed author Margaret Atwood spoke up to defend library programs that were threatened by proposed budget cuts, Ford raised eyebrows by saying he wouldn't know her if she walked by him. More recently, he faced a threatened defamation action by the city's police chief that was only called off after a written apology from the councillor. There were other controversies along the way as well. In May 2013, the Globe and Mail -- in a story that cited anonymous sources -- alleged Ford was once a hashish dealer in the '80s, though the newspaper said it could find no record of any criminal charge of drug possession or trafficking. Both Ford and his lawyer called the accusations false and Ford took the media to task for what he suggested were relentless attacks on his family.

QUOTE: "When it comes to watching taxpayers' money, there is no more honest politician in the entire country in my opinion than ... (Mayor Rob Ford). The opposition can flip it around, turn it around, twist the numbers, but the facts are the facts. And the facts are, you're honest as the day is long" -- Doug Ford addressing his brother, Mayor Rob Ford, on a radio show the pair co-hosted, days after Toronto police said they had recovered a video that allegedly depicted the mayor smoking what appeared to be crack cocaine. 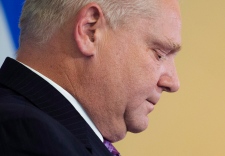 Doug Ford, brother and campaign manager for Rob Ford, reads from a prepared statement at city hall in Toronto on Thursday, May 1, 2014. (The Canadian Press/Darren Calabrese)