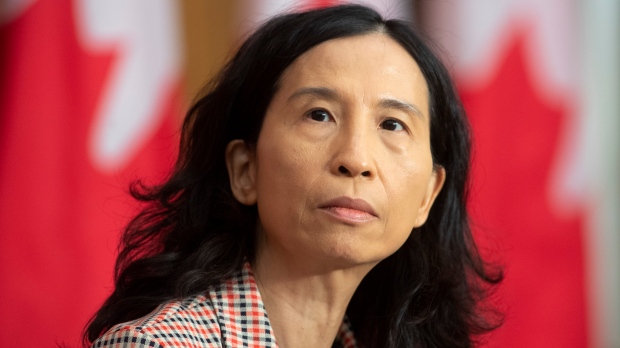 OTTAWA - Canada's chief public health doctor is worried about the amount of false information being floated about the COVID-19 pandemic.

Dr. Theresa Tam says when false information is spread - either intentionally or not - it does not help public health officials ensure the public has the information they need to make the right choices.

“As I reflect on the unprecedented pandemic that we have, there's also I think the pandemic that's occurred in the age of social media, and many different ways in which information is spread faster than the virus itself,” Tam said Tuesday at one of her regular news conferences on Parliament Hill.

Both Tam and Prime Minister Justin Trudeau urged Canadians to be responsible about the information they share by verifying it first with multiple and official sources.

“When you look at a piece of information, ask a number of questions, including exactly where this has come from,” said Tam. “Definitely ask yourself this question before you forward the information to someone else.”

Staff in the Prime Minister's Office confirmed they respond frequently to queries about fake news. Some of it arises in other countries and is picked up here, sometimes it's Canada-specific.

Trudeau said some of it comes from “foreign actors trying to disrupt successful democracies, others are people with extremist agendas within our countries trying to weaken people's confidence in our institutions and our democracy.”

In many cases it has a real impact. A survey by health authorities in Quebec in August found about one-quarter of people in that province believed COVID-19 was created in a laboratory on purpose and a third felt the government was hiding things about the pandemic.

Other surveys have found people who believed conspiracy theories about the virus's origins were less likely to follow public health advice about wearing masks, physical distancing and limiting contacts.

Trudeau said he was asked by a student in a recent forum about “COVID internment camps.”

The internment camps claim arose recently after Health Canada posted a request for information online seeking a business that might be able to help manage the government's quarantine sites.

Health Canada has managed 11 quarantine sites in nine cities for travellers arriving from abroad who don't have suitable places to quarantine, such as someone who lives with a senior citizen and whose home doesn't have space to isolate from the high-risk individual for two weeks.

The department is now potentially looking for a third-party operator to manage quarantine sites.

“These emails and social media posts about 'isolation camps' are an example of false information being used to play on fears over a public health issue,” Davidson said. “Disinformation like this is intended to deceive Canadians and cause fear and confusion.”

Another claim floating around currently is that the federal government is making up the pandemic in a bid to generate public support for both a universal guaranteed income, and to relieve all household and consumer debt in Canada.

A spokesman for Trudeau said that claim has no basis in reality.