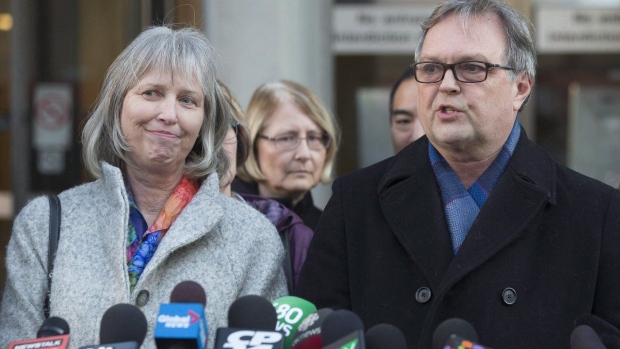 Clayton Babcock (right) and Linda Babcock read a statement outside a Toronto courthouse on Monday, Feb. 26, 2018, after a sentencing hearing for Dellen Millard and Mark Smich, who were convicted of the first degree murder of their daughter Laura Babcock.THE CANADIAN PRESS/Chris Young

The latest decision from the country's top court opened an old wound in Linda Babcock's heart.

The Friday ruling that declared consecutive parole sentences unconstitutional brought back the sharp pain of her daughter's murder by a serial killer and his friend nearly 10 years ago - and left Babcock in tears.

“This means that every life does not matter,” Babcock told The Canadian Press as she choked up.

The Supreme Court of Canada declared unconstitutional a 2011 Criminal Code provision that allowed judges to impose parole ineligibility periods of 25 years to be served consecutively for each murder, rather than concurrently.

The law had been applied to some of Canada's most notorious multiple murderers in recent years, including Dellen Millard and Mark Smich, who were found guilty of murdering Babcock's 23-year-old daughter, Laura.

The Supreme Court said the law violated the Charter of Rights and Freedoms that guarantees against cruel and unusual treatment because it can deny offenders a realistic possibility of being granted parole before they die.

Linda Babcock said the ruling was a huge blow.

“Our life has been destroyed by their crime,” Babcock said of her daughter's killers. “And yet the courts feel that it is cruel to have them in prison for life. Why do the victims have less rights than the criminals?”

She suggested the top court was out of touch with victims and their families.

“These judges don't understand the pain we go through every single day for our lifetime,” Babcock said.

“And yet they give criminals some leniency, not wanting them to suffer too much. We suffer horribly every single day - I mean, it's been almost 10 years and I still cry every day.”

Five months after the pair killed Laura Babcock in 2012, Millard killed his father, Wayne Millard, a wealthy aviation executive whose death was initially ruled a suicide.

Six months after that, Dellen Millard and Smich would kill again, taking Tim Bosma, a 32-year-old, out for a test drive in the Hamilton man's truck and killing him.

“This is a travesty of justice,” Roberts said. “The murders (Dellen Millard) has committed are heinous, unforgivable, madness at its zenith, and he is only one of many. His parole reduced is a joke.”

In a different case, the families and survivors of 2018's deadly van attack in Toronto have been waiting - along with the judge in the trial - for the Supreme Court's ruling for more than a year before proceeding to sentencing.

Now Alek Minassian will serve an automatic life sentence without chance of parole for 25 years for killing 10 people on April 23, 2018. Two others died a few years later, one of whom never left the hospital after the rampage.

Victims had believed the prosecution would apply for several consecutive periods of parole ineligibility for Minassian, who was found guilty of 10 counts of first-degree murder last year.

Cathy Riddell is one of the victims who survived after suffering brutal injuries when she was blindsided by Minassian as he drove down a busy sidewalk in a rented van.

Now she is enraged.

“I'll tell you what cruel and unusual punishment is,” she said.

She said she was disappointed in the justice system.

Elwood Delaney was infuriated when The Canadian Press told him about Friday's ruling.

His grandmother, Dorothy Sewell, was walking to the bank that April day when she was killed in the attack.

“Because of that ruling, I'm not going to get proper closure anymore,” he said. “That's what the Supreme Court of Canada just did to me and all a whole bunch of other victims.”

The Babcocks, Riddell and Delaney all vowed to fight for change at Parliament.

“How are we ever to prevent multiple murders if not with stricter sentences?” she wrote.

“If there is any hope of changing what has occurred in the courts, please stand up for the rights of the victims of crime and make sure that these people are never allowed into society again.”

This report by The Canadian Press was first published May 28, 2022.