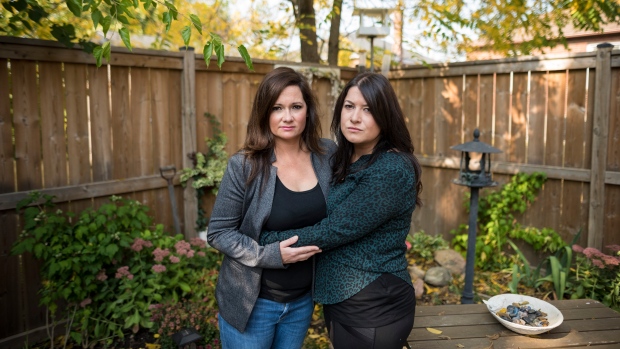 Kristy Kokoski, left, and Louise Frame, pose for a photograph near their home in Hamilton, Ont., on Sunday, September 27, 2020. Seven Canadian families are suing an Ontario sperm bank, alleging they were misled about their donor's background, including a potentially debilitating genetic condition. THE CANADIAN PRESS/ Tijana Martin

Seven Canadian families are suing an Ontario sperm bank, alleging they were misled about their donor's background, including a potentially debilitating genetic condition.

The families - who've launched separate lawsuits - claim the alleged lack of transparency and negligence by Outreach Health Services has led to extensive suffering.

“As a result of the conduct of the of the defendants ... the plaintiffs sustained injuries in the form of physical and emotional pain,” reads a statement of claim filed by Louise Frame and Kristy Kokoski, one of the families taking legal action.

Outreach Health Services, which imports and distributes donor sperm, did not respond to requests for comment. None of the allegations have been proven in court.

For Hamilton-based Frame and Kokoski, learning that their two-year-old son has the genetic Charcot-Marie-Tooth disease has been “heartbreaking.”

“We're still very upset about it,” Frame said in an interview. “We're just hoping that he'll be okay, but it's very difficult to come to terms with.”

The families behind the suits are based in Ontario, Quebec, British Columbia, Alberta and Newfoundland. They all target Outreach and ask the Ontario Superior Court for more than $4 million in damages each.

The families allege that Newmarket, Ont.-based Outreach presented an individual known as Donor 3116 as a cytogeneticist with an advanced degree, an “impressive health history” and no genetic abnormalities.

In reality, the claims allege, Donor 3116 worked as a lab technician, did not have any advanced degrees and has genetic abnormalities that include Charcot-Marie-Tooth disease. Also known as CMT1, the genetic disorder affects muscle and limb function through damage to nerves.

The lawsuits allege that photographs of the man before he became a sperm donor made it apparent that he had CMT1.

They allege, among other things, that Outreach failed to validate the donor's profile or screen him for genetic conditions. They also allege Outreach continued to promote the donor's sperm even after learning about his true profile.

The suits claim at least seven children have been born with the donor's sperm sold by Outreach.

“In failing to conduct any investigation whatsoever, while simultaneously touting the notion that their procedures for donor screening were rigorous and comprehensive, the defendants acted with callous disregard for the safety of the plaintiffs and the child ... conceived as a result,” Frame and Kokoski's suit alleges.

The lawsuits further claim Outreach “has provided no help whatsoever to the parents who are now incurring extraordinary medical and financial expenses associated with the CMT1 and genetic abnormalities that are developing in their children.”

Lawyer James Fireman, who is representing the families, said one goal of the suits is to guarantee a safe supply chain for Canadian families who use sperm banks.

“This is about people being sold something that is not what they were promised in a way that is so horrifying,” Fireman said in an interview.

Frame and Kokoski said they never regret having their son but now live with anxiety over how his condition will affect his life.

“We're blessed to have him in our lives, I just wish that he wasn't afflicted with this disease,” said Frame. “It's pretty upsetting.”

A separate set of lawsuits was filed in 2016 against Outreach, as well as its American owner, that alleged a different sperm donor's criminal history and mental health diagnoses were not disclosed. At least one of those claims was dismissed in 2017.