The NBA Finals hit Canada for the first time ever on Thursday night and it ended with a 118-109 win for the Toronto Raptors.

Tipoff between the Raptors and the defending champions, the Golden State Warriors, was at 9 p.m. but fans were ready to take in the historic series hours in advance.

"The energy here is crazy," one fan told CP24 with just seconds left in the game. "Everything is positive vibes, everyone is cheering, everyone is on the same page, we all have the same goal, it's just great to have the city together."

This is the first time in franchise history, which began 24 years ago, that the Raptors have made it to the finals. Their advancement to the finals comes after they defeated the Philadelphia 76ers and then the Milwaukee Bucks.

A lineup outside of Scotiabank Arena to fill Jurassic Park started forming around 6:30 a.m. The square hit its capacity at 6,000 fans.

Gates to the viewing party did not actually open until about 6 p.m. but a number of fans told CP24 on Thursday morning that they were eager to ensure they got a good spot in the square.

“This is 24 years in the making,” another fan said before the game began. “All those heartbreaks, all those years getting swept by LeBron only to see the shot (against Philadelphia) and all these fans celebrating after Game 6 – it is 24 years overdue.”

Ahead of Game 6 of the NBA Eastern Conference Finals in Toronto against the Milwaukee Bucks, fans were lined up to fill Jurassic Park as a thunderstorm rolled through the city. Aerial footage of the line up to get into the square that day showed thousands of people wrapped around the downtown core.

Ahead of the start of the NBA Finals, additional viewing screens along Bremner Boulevard were setup in anticipation of the influx of fans.

Jurassic Park was transformed into a television set for Good Morning America on Thursday morning, featuring former Raptor Chris Bosh and Toronto’s very own superfan, Nav Bhatia. During the broadcast, a few lucky fans won tickets to the game.

Where to watch Raptors vs. Warriors

If you were not one of the lucky fans watching inside the arena or could not make it to Toronto to watch in Jurassic Park, don’t fret.

Many cities across the Greater Toronto Area and the country hosted their very own viewing parties.

IN PHOTOS: Raptors fans show off their spirit

Mississauga invited west-enders to watch amongst 30,000 other fans in Celebration Square, transformed into Jurassic Park West for the series. Brampton encouraged residents to come cheer on the Raptors downtown in front of a 100-foot screen in Garden Square, dubbed Jurassic Square for the finals.

As well, Cineplex said it will be broadcasting all the games of the finals at no cost at 33 of its theatres across the country.

It did not rain on the Raptors parade

While fans began to congregate at Jurassic Park early Thursday, seasonal temperatures were present but scattered showers were expected to possibly hit the city ahead of tipoff.

Mild temperatures in the mid-to-high teens were expected to continue throughout the evening.

Navigating the city on game day

A number of road closures will be in effect throughout the day on Thursday to accommodate the large crowds.

Bremner Boulevard will be closed between Lake Shore Boulevard West and York Street and from York Street to Lower Simcoe between 7 a.m. and midnight.

York Street will also be closed from Front Street West to Lake Shore Boulevard between 1 p.m. and midnight.

For those taking transit, the TTC has cancelled a scheduled subway closure on Line 1 on Thursday to make it easier for fans to get in and out of the downtown core.

In terms of GO Transit, trains and buses will be operating long after the end of the game. An extra train on the Lakeshore West Line, with all stops to Aldershot, and a “special train” on the Kitchener Line, servicing all stops to Mount Pleasant, has been added, Metrolinx said.

The transit agency is asking riders to keep an eye on the schedule boards at Union Station has the game comes to an end.

Toronto Raptors fans sing the Canadian national anthem outside the Scotiabank Arena, at what's dubbed "Jurassic Park," during the NBA finals debut against the Golden State Warriors in Toronto on Thursday, May 30, 2019. THE CANADIAN PRESS/Tijana Martin

Toronto Raptors fans line up to get into the fan area known as "Jurassic Park" outside the Scotiabank Arena ahead of game one of the NBA Finals against the Golden State Warriors, in Toronto on Thursday, May 30, 2019. THE CANADIAN PRESS/Chris Young

Toronto Raptors fans line up to get into the fan area known as "Jurassic Park" outside the Scotiabank Arena ahead of game one of the NBA Finals against the Golden State Warriors, in Toronto on Thursday, May 30, 2019. THE CANADIAN PRESS/Chris Young 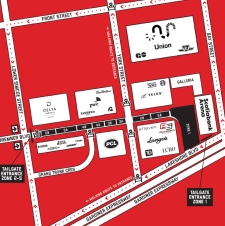 Road closures are in effect in Toronto for Game 1 of the NBA Finals on Thursday night. (The City of Toronto)