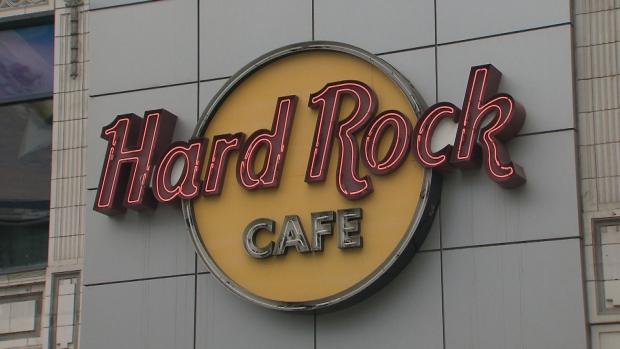 The doors will close on another legendary spot in Toronto tonight.

Earlier this year, music fans and Torontonians alike learned that the Hard Rock Café would be no more.

It’s fate? A Shoppers Drug Mart location will open in its place.

But the downtown restaurant and historic live music venue will go out with one final show.

On Wednesday night, the space will host “Music Heals,’ a fundraiser for kids with disabilities.

The event was inspired by Kadey Schultz, a Toronto-based lawyer and mother of two. Schutlz’s 10-year-old son Emery is battling Duchenne Muscular Dystrophy, a regressive disorder that causes a progressive loss of muscle function. The disease affects one in 3,500 young boys annually.

The show will feature Toronto band The Doubts and a performance by Emery’s 11-year-old sister Lily with her very own “rockin’ band.”

Hard Rock International, the parent company that operators the restaurant chain, acknowledged that the lease would end in May but has stayed relatively mum on whether or not it would reopen elsewhere in the city.

“Hard Rock International is reviewing other opportunities, both in Toronto and elsewhere in Canada, to expand its Cafe, Hotel and Casinos brands,” a statement released in March read.

The Canadian flagship location, which is adorned with one-of-a-kind music memorabilia, has hosted hundreds of live performances since it opened its doors in 1978.

It also made local music history. When the building was known as the Friar’s Tavern, Bob Dylan is said to have attended the pub and discovered Levon and the Hawks – a group of Canadian musicians who would later become The Band.

According to an article published in Retail Insider Monday, the highly-sought after Yonge and Dundas location has been leased to Shopper’s Drug Mart for $2 million per year – double the rent Hard Rock International was previously paying.

The Hard Rock isn’t the only downtown Toronto landmark to come down this week.

Yesterday, crews dismantled the iconic Honest Ed’s sign at the corner of Bloor and Markham streets.

The sign will be refurbished and rehung above the entrance to Ed Mirivish Theatre on Victoria Street later this year.

The discount store was sold in 2013 to Westbank and is expected to become a rental building made up of approximately 850 units.