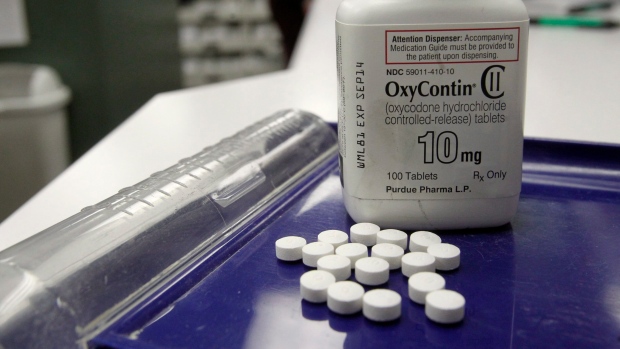 OxyContin pills are arranged for a photo at a pharmacy in Montpelier, Vt. (AP Photo/Toby Talbot)

Toronto paramedics responded to nearly double the number of fatal overdoses in the first four months of this year than they did during the same period last year.

According to data provided by Toronto Public Health, paramedics responded to 68 fatal opioid overdoses through May 1 of this year compared to 35 such calls in the first four months of 2018.

The increase in calls comes in the wake of the province cutting funding to two Toronto overdose prevention sites in March, though both facilities have continued to operate thanks to private donations and an exemption from Health Canada.

“We are seeing overdose deaths in Toronto, in Ontario and right across this country escalating rapidly,” Coun. Joe Cressy, who is chair of Toronto’s Board of Health, told CP24 on Thursday afternoon. “Saving lives and stopping overdose deaths requires increased prevention, it requires increased treatment and it requires harm reduction overdose prevention sites. This province is cutting funding for every single one of those and not only have they cut funding for overdose prevention sites here in Toronto and across the province, they are also cutting our budget (Toronto Public Health), which is what we use to prevent overdoses in the first place.”

Since Toronto Public Health began tracking overdose calls in August, 2017 there have been 302 fatalities, which equals out to an average of 14.3 per month. So far in 2019, the total number of fatal overdose calls has exceeded that threshold in every month other than January.

It should be noted that the data may not capture the full extent of the opioid crisis as the only calls designated as fatal are the ones in which a patient was pronounced dead at the scene.

The data would not capture instances in which a patient is taken to hospital and later pronounced dead.