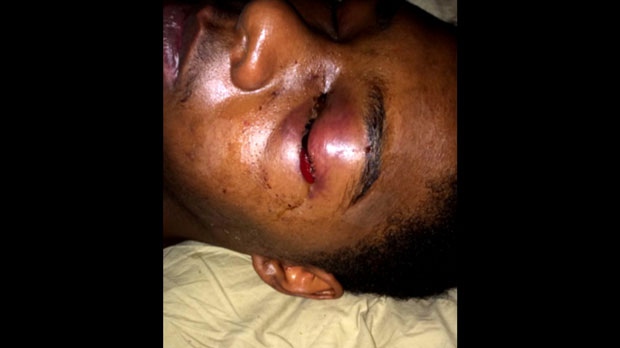 Images of Dafonte Miller after he was brutally beaten by an off-duty Toronto police officer in Whitby in December of 2016.

A Toronto police officer who is accused of interfering with the investigation into the beating of Dafonte Miller is no longer with the Professional Standards Unit, Mayor John Tory confirms.

A formal complaint filed with a provincial police watchdog in August alleged that Det. John Theriault, who is the father of Const. Michael Theriault and Christian Theriault, was aiding “in the concealment of the crimes committed by his sons.”

The complaint further says he improperly contacted Durham police investigators to “gain information relating to the status” of their investigation and to “provide additional false information about injuries suffered by his son, Christian” by Miller.

Speaking with reporters on Tuesday morning, Tory confirmed that John Theriault is no longer a member of the professional standards unit, though he did not comment on what role he now holds with the TPS.

Tory said that though it was not his call to remove Theriault from the Professional Standards Unit, it is a decision that he agrees with, given an ongoing third-party review of the police handling of the Dafonte Miller case.

“My understanding is that he is no longer in the professional standards unit at this time,” Tory said. “That is the decisions of the command structure but I would say yes, to have this person removed from that particular area pending the results of these investigations is suitable.”

Miller was walking to a friend’s house in the early hours of Dec. 28, 2016 in Whitby when Michael Theriault, then off duty, and Christian Theriault confronted him.

It is alleged that Michael Theriault identified himself as a police officer and began asking Miller questions.

Miller attempted to flee but it is alleged that the brothers gave chase, eventually catching up with him and beating him so severely that his eye will have to be surgically removed.

The Special Investigations Unit was not initially notified about the incident but began an investigation in April, after they were contacted by Miller’s lawyer.

Const. Michael Theriault and Christian Theriault were then subsequently charged with aggravated assault, assault with a weapon and public mischief, though questions surrounding the way the case was handled have lingered.

None of the charges against men have been proven in court.

In an interview with CP24 on Monday night, Tory said that he is anxious to learn the results of the third-party review being conducted by the Waterloo Police Service.

He said that the injuries sustained by Miller are “profoundly unacceptable.”

“I find it completely unacceptable, as do I think most people in the GTA, that anybody, anytime by anybody, including on or off-duty police officers, should be beaten in such a way that they lose their eye,” he said. “That part is unacceptable. What we don’t know yet are all the facts and that is why it is being investigated by Waterloo police. When that is done, decisions can be made based on the facts as to what should be done.”