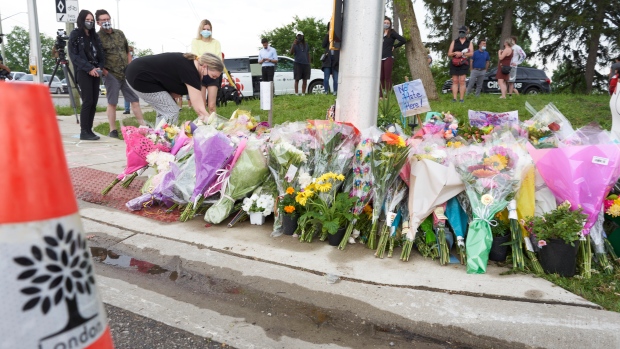 Mourners place flowers at the scene of a hate-motivated vehicle attack in London, Ont. on Tuesday, June 8, 2021, which left four members of a family dead and their nine-year-old son in hospital. THE CANADIAN PRESS/ Geoff Robins

The deadly attack against a Muslim family in southwestern Ontario was “a senseless act,” the father of the man accused in what police believe was a deliberate hate crime said Thursday.

The family was out for an evening stroll when a man driving a pickup truck mounted the sidewalk and ran them over, killing four people and sending a child to hospital with serious injuries.

Nathaniel Veltman, 20, has been charged with four counts of first-degree murder and one count of attempted murder.

“It was with utmost shock and horror that I came to hear of the unspeakable crime committed last weekend,” Veltman's father, Mark Veltman, said in an email to The Canadian Press.

“There are no words adequate to properly express my deep sorrow for the victims of this senseless act.”

The couple's nine-year-old son, Fayez, was seriously wounded but is expected to recover.

Police allege the attack was a planned and premeditated act that targeted Muslims.

Earlier Thursday Veltman made a brief virtual appearance in court to face four counts of first-degree murder and one count of attempted murder.

“Mr. Veltman have you retained counsel?” asked Justice of the Peace Robert Seneshen.

“I've only spoken to them,” Veltman said, adding that he was in discussions with a local law firm.

Court heard that the Crown continues to work on disclosure, which will be provided to Veltman once he has retained a lawyer.

Veltman is set to return to court on June 14.

Meanwhile, calls continue to grow for a national summit on anti-Muslim hate.

The National Council for Canadian Muslims has a petition signed by more than 35,000 people calling for all levels of government to tackle Islamophobia.

“This loss of a family, the loss of a child in our community because of Islamophobia - this is a sorrow that will run deep for a long time,” the council wrote in the petition. “Let that sorrow be the ground where we stand for justice and stand for change.”

The group's petition echoes a call by the London Muslim Mosque, to which the family belonged.

The funeral for the family will be held at 1:30 p.m. Saturday at the Islamic Centre of Southwest Ontario that is open to the public. The family will hold a private visitation in the morning at the O'Neil Funeral Home.

Nathaniel Veltman,20, is pictured in this sketch from his virtual appearance in court on June 6.