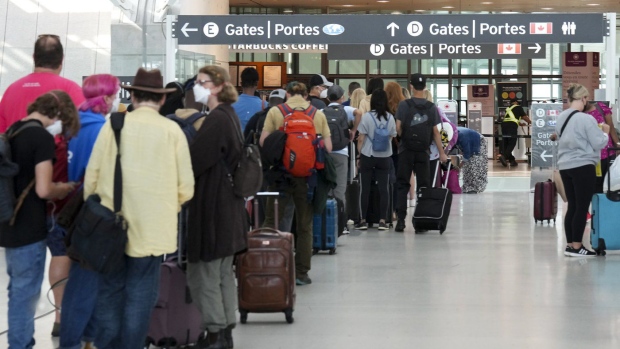 People line up before entering the security zone at Pearson International Airport in Toronto on Friday, August 5, 2022. THE CANADIAN PRESS/Nathan Denette

The rules that bolster compensation for air passengers subjected to delayed flights and damaged luggage have been largely upheld in a Federal Court of Appeal ruling.

The court on Tuesday dismissed the appeal that challenged the validity of the passenger bill of rights, with the exception of one regulation that applies to the temporary loss of baggage.

Earlier this year, Air Canada and Porter Airlines Inc. along with 16 other appellants that include the International Air Transport Association - IATA has about 290 member airlines - brought the challenge to the passenger bill of rights to a Federal Court of Appeal panel.

The airlines argued that the country's passenger rights charter violates global standards and should be rendered invalid for international flights.

This includes the most recent amendment made to the passenger protections that require airline compensation if they cannot provide a new reservation within 48 hours of a flight cancellation or “lengthy delay” for delays and cancellations outside of the airline's control such as major weather events or a pandemic.

The three-year-old federal regulations took on renewed relevance to thousands of Canadians in 2020 as pandemic lockdowns and border closures grounded fleets and prompted mass flight cancellations.

A request from the airlines to suspend the Air Passenger Protection Regulations (APPR), initially launched by the airlines in 2019, was turned down by the Federal Court of appeal in 2020.

In court filings, the airlines argued that the regulations exceed the Canadian Transportation Agency's authority. They also went against the Montreal Convention, a multilateral treaty, by imposing heftier compensation requirements for flight cancellations or lost baggage. For example, the rules demand higher damages based on the length of a delay and regardless of “the actual damage sustained by each individual passenger,” according to the appellants.

In a case that pitted IATA and the airlines against the CTA and the attorney general, Ottawa argued that there is no conflict between the passenger protections and the Montreal Convention.

However, the court said that the interpretation of “lost baggage” was inconsistent with the Montreal Convention that entitles passengers to compensation for lost or damaged baggage.

While Lukacs has criticized the lack of breadth and enforcement of the APPR, he said that the court's decision to uphold passenger protection in Canada “breathes new life into the initiative to revamp the APPR and correct its many shortcomings.”

Canada's air passenger charter came under scrutiny at a November parliamentary hearing where advocates called for improvements to the current compensation system's loopholes and backlogs.

Sylvie De Bellefeuille, legal adviser from Option Consommateurs, told MPs that it is up to customers to seek compensation based on the information provided by the airlines, leading to a lack of transparency such as in the case of flight disruptions this summer.

Currently, a backlog of over 20,000 complaints remains in front of the CTA.

Lukacs said there is a lot of work ahead to get air passenger protections that actually work and advocated for a passenger bill of rights similar to that of the EU.

A similar challenge was presented by IATA to the EU, who argued that a regime similar to the regulations has been in force since 2004 and the Court of Justice of the European Union ruled it is compatible with the Montreal Convention, despite challenges from the airline industry.

The CTA and appellant lawyer Pierre Bienvenu were not immediately available for comment.